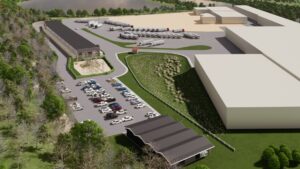 A Texas-based company wants to install a series of energy storage  batteries in Buchanan and Cortlandt that it says would connect with existing infrastructure to ensure reliable electricity, while creating jobs and tax revenue.

The first phase of the proposal — named River Bend Energy  — would be sited on three acres of what is now a parking lot on the grounds of LaFarge building products (also known as CertainTeed) in Buchanan. The site is adjacent to the now-closed Indian Point nuclear power plant, and CertainTeed has transmission easement rights across the site that Jupiter could use.

The Buchanan proposal would represent an investment of $175 million to $200 million, according to Hans Detweiler, senior director for development with Jupiter Power. Construction would bring an average of 30 to 40 union workers to the site, rising to two or three times that during peak periods.

When completed, the site would have a capacity of 250 megawatts of electricity and generate an estimated $600,000 in annual tax revenue, Detweiler said.

Future components of the proposal, envisioned on as-yet-unspecified parcels in the Town of Cortlandt, could bring the overall capacity to about 1,000 megawatts — roughly equal to the output of one of Indian Point’s two nuclear reactors.

No formal plans have been filed with either the village or town, although the company made an initial presentation at a Cortlandt Town Board work session in mid-July.

Repurposing infrastructure built to accommodate Indian Point “makes enormous sense … for the next generation of energy projects, to support continued energy development in the area and support renewables like wind and solar,” said Detweiler, who is hoping the first phase could be operating by 2024 or 2025.

The batteries would be charged during periods of low electric use and discharge during times of high use, allowing more renewable energy to be available at times when power isn’t being produced by solar or wind, according to Jupiter.

Jupiter states its technology runs quietly, and creates no runoff, discharge, vibrations or light pollution. The facilities are operated remotely with safety systems that are constantly monitored. On-site maintenance personnel would help ensure safety, according to the company.

“Although I support battery storage systems, it would depend on where they are located and there would have to be a whole series of criteria, in my mind, for us to proceed,” said Becker, who has announced his candidacy for supervisor in November’s election.

Becker said Jupiter would need to address safety issues connected with the project’s proximity to Indian Point and the Spectrum Pipeline; the development would have to be almost invisible to the public; create no noise; have no significant impact on traffic or the neighborhood’s quality of life; and receive support from residents.

“It’s a beautiful and historic area that needs to be protected,” he said. “The developers are telling us it meets those criteria … but I’m not sure of that yet. We heard a half-hour presentation.”

Becker said the company’s initial proposal called for either a payment in lieu of taxes agreement or a direct payment of taxes to the town, school district, and village.

Buchanan officials did not reply to a message seeking comment.