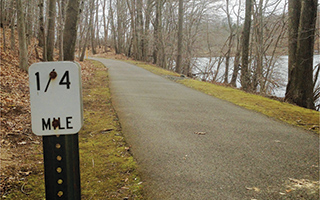 When I was in college, I was thin as a reed. I weighed maybe 155 pounds and had to force-feed myself mounds of chocolate and beer to make up for all the calories I burned through each day as an over-active college student. My “exercise” of choice was “looking for girls” and doing so kept me healthy, slim, and seemingly indestructible.

The first few years after college, my body went through certain changes, I got used to having the money to purchase things like food, and my new lifestyle allowed me to gain about 20 pounds in a couple of years until I could at least turn sideways and not be invisible. Once I reached my true adult weight of around 175 pounds, I tossed the scale away and have never looked back, well aware that I would remain 175 pounds for the rest of my life.

I have never thought much about being in shape, because I was in great shape in college, and therefore why wouldn’t I always be in great shape without trying? Yes, I did notice certain things, like how I slowly had to shop for pants the next size up. But that was because clothing sizes were getting smaller, not because I was getting any bigger. I also noticed that long hikes left me just a little bit more winded, but that was because the Earth has been slowly leaking atmosphere for decades, making us all work harder for our oxygen.

Then one day River Mom suggested that maybe I ought to think about finding a way to get some exercise. I laughed good naturedly at what I assumed was a joke. When she didn’t laugh back I became confused. Me? Need
exercise? But I am the same fit, svelte, 175-pound man I’ve been since college.

It was River Mom’s turn to laugh.

Convinced that I was right, I scoured our bathroom for a scale, figuring we must have one somewhere. I eventually found it on the floor next to the sink (I’d always wondered what that thing was) and stood on it to prove my point.

I did not prove my point.

It would seem that at some point in the past 20 years, I stopped weighing 175 pounds. I had to also assume that I had also stopped being thin and svelte and in shape as well. That meant that River Mom was right (as usual). But did I need to be in shape? If I’ve gained a few pounds (we’ll leave it at that) during the course of living my life, was that such a bad thing?

In truth, I was only asking myself the question because I was subconsciously looking for a reason not to work out. But River Mom pointed out something very important: the River Kids. Did I want them to see me as an out-of-shape potato? What sort of example would that set? If I wanted them to take their health seriously, I needed to take my own health seriously. Plus, by not taking care of myself, I increased the chances that I wouldn’t be here for them as long as I’d like.

The die was cast. I needed to get some exercise. I wanted to do something that was simple yet efficient, healthy yet inexpensive, accessible yet portable.

If you’ve never run before (as I hadn’t), it may seem a simple thing. It’s more or less walking, but at a faster pace. I’ve walked all my life. How hard could running be? Initially, I thought I’d hit upon the perfect set-up – the treadmill. We got one, brought it into our home, set up an old TV and DVD player in front of it, and I could get this so-called exercise while catching up on episodes of Doctor Who.

The problem was, I’d run for maybe 30 minutes, every muscle would protest the abuse, my body would drip with sweat, and yet I hadn’t actually moved. I began to grow frustrated with my lack of travel. If I was going to drive
myself to the ends of my physical limits, I wanted to accomplish something aside from seeing The Doctor save time and space over and over.

River Mom suggested I run outside. I told her I wasn’t sure if we had enough electrical outlets in the yard to run the treadmill, DVD player, and TV at the same time. She said that wasn’t what she meant. See, River Mom runs
regularly, far more regularly than I. She has run that godawful Rocky race in Rockefeller Park and the Peter Oley Turkey Trot in Irvington several times, and last year our daughter even joined her. Seeing them whip down the chute at the finish line was inspiring.

So I took River Mom’s advice and ran outside. It was a revelation. I’d pump my legs, burn those evil calories, and when all was said and done, I was somewhere other than where I began! At first this was its own problem, but I soon learned to turn around halfway through my run so as to end up near my car. Slowly but surely (mainly slowly) I lost some weight, my body began to adjust so that I looked slightly less pear-shaped, I was not as easily winded, colors were brighter, birds sang, and I’m pretty sure I grew back some of my hair (though that may be more in my head than on my head).

It hasn’t always been easy to keep it up. For one thing, it turns out you’re not encouraged to run outside when there’s a foot of snow on the ground (which is when the treadmill comes in handy). For another, it is incredibly easy to find an excuse not to run (“It’s National Broccoli Day! Nobody runs on National Broccoli Day!”). Some months I’m better at keeping at it than others, but I keep going. Last year I even entered my first 5K (we were chased by zombies, it was awesome).

While I’m told I probably won’t revert to the 175-pound, hunk of a stud I was at age 20, I can at least stem the encroaching tide of weight gain and regain a semblance of a healthy lifestyle. I’m planning on entering more fun runs in the future. There’s a psychotic obstacle course in Brooklyn we’re looking at this summer.

And I’m pretty sure 2014 will be the year I enter the Peter Oley Turkey Trot.