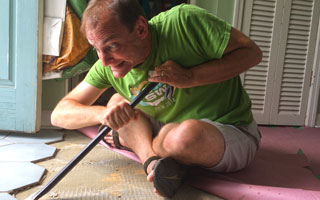 My kitchen floor is covered in pink construction paper. This is not due to any delightful craft project of my daughter’s, nor is it because my son is transforming the kitchen into a Ninjago Lego environment or whatever he’s into today.
No, the pink construction paper covers my floor because the perfectly-good-if-quaint

1980s-style tile that used to be there is currently being lovingly and carefully chiseled up. By me. With a crowbar.

Why am I tearing up my nominally-adequate floor? An excellent question, and one that I have verbalized numerous times during my days of hard labor (though never when anyone is within earshot). Apparently River Family decided it was time for a new kitchen floor.  I’m not exactly sure how this became a collective decision, as I don’t recall deciding on it and I’m pretty sure neither of my children are making any significant household decisions this early in their lives, but there ya go. A great option to consider for kitchen floors is vinyl plank flooring.

Also, River Family (the same River Family that decided to tear up the floor) decided that in order to save money, we would be doing the demolition ourselves. And when I say “we” I mean “me.”

Under normal circumstances, I would have debated the wisdom of undertaking such an enterprise. My arguments would have been powerful and convincing, and in the end River Family would have bowed to my wisdom and I wouldn’t be crouching on the floor obliterating poor, inoffensive pieces of light blue tile. My objections became moot before I had the chance to utter them, however, when River Mom unleashed River Son on the loosest tiles while I was not at home. I returned to find a grinning River Son greedily clutching the crowbar and surrounded by a decent-sized chunk of former floor.
“Well now we HAVE to tear the rest of it up,” argued River Mom in her most-innocent-sounding tone. “Oh well.”
Now tearing up an old tile floor is not, truth be told, that much of an issue. It’s actually kind of fun. And I get to play with a crowbar. Which is cool.

No, the issue here is why. Why are we spending the time (me), energy (me), and money on a new kitchen floor? The old one worked fine. You could walk on it, no problem. Sure, a couple of the tiles would come loose every now and again, but I always just Gorilla Glued them right back down and went on with my day. And yes, some of the other tiles were pretty cracked, with large gaps in the grout, but I liked to think of those cracks as “flavor cracks” which collected various microscopic bits of whatever fell on the floor and preserved them as a treat for anything small enough to get in there and sample the wares.

Why disrupt our household and lather our kitchen with pink construction paper – no matter how cool it looks? I was going to ask River Mom this very question, but then thought better of it. So I asked my daughter instead. “River Daughter? Why are we tearing up our kitchen floor?” “Because the old one doesn’t look good.” “What’s wrong with it?” “It’s old and doesn’t go with the house.” It would seem my daughter’s metamorphosis into River Mom is now complete.

I could analyze this constant need to alter or renovate the home six ways to Sunday and still not understand it. The condition appears to be widespread. Nearly every family we know has undergone or is currently going through some sort of renovation.  It’s as if people all over the Rivertowns suddenly woke up and said “Hey! You know that house we spent a ton of money on some years back? The one for which we went deep into debt and in which we planned to raise our family for generations to come? It’s no good! What were we thinking?”

For whatever reason, I was not born with the “must change things now!” gene. Instead, I inherited the “works for me, I’m going to the movies” gene. Orange walls and turquoise floor? No need to repaint, I’m sure those colors will come back in style someday. Car with humiliating dents in it? No need to get them fixed, the car still runs perfectly well. Dead animal clogging the french drain? … OK, yeah, that’s definitely not my thing, I’d rather call in a residential plumber to fix my blocked drain. You may also consider contacting these professional plumbing services for unclogging a drain.

In order to reconcile my hard-wired desire to leave well enough alone with the reality of unleashing my inner-rage on my kitchen floor, I tried to think outside the box. Or at least, outside my own box. Was this really just change for change’s sake? Not to River Mom, who gets more and more excited with each section of floor I rip up and cover with pink construction paper. For her, it’s more than a renovation, it’s an upgrade. It’s an investment that will pay off when we sell the house.  (Wait…what??) The new floor, I am told, will “go” with the house, will not be ugly, and will probably not have any flavor cracks. The old tile was the best the previous owners could do in the 1980s, but flooring has evolved in the 30+ years since then, and we have an opportunity to create something better, something that will last until the next owners think to themselves, “Oh my God, what were the previous owners thinking? This floor is so 2015!”

Things are always being updated or upgraded or simply improved for what I would consider “real” reasons. We’re getting a New NY Bridge not because folks decided they were tired of the Tappan Zee and felt it was time for a $5 billion dollar-or-so change, but because of the very real possibility of the old bridge collapsing during rush hour some day. They’re putting in an elevator at Morse School not because they were bored and needed something to do but because, well, it’s sort of the law.

So I can justify my kitchen floor renovation as “needed.” It’s not just the eternal march of progress – it’s an attempt to put an end to all the times guests have slipped or tripped on a loose tile. Now that I see it in those terms, I am all-in. Onward, progress! To infinity and beyond! Oh, who am I kidding? For me it’s all about playing with the crowbar.