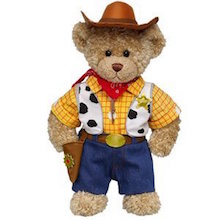 I already miss Build-a-Bear. I know, it’s a cruel, sadistic franchise bent on tugging at your child’s heartstrings so that he or she tugs at your wallet strings, but I miss it all the same. My son once created a peace-sign-covered blue teddy bear and dressed him up as Batman. That was hideous, but beyond awesome. I will also miss how at the end of every Build-a-Bear birthday party, the kids paraded their new best friends around the store shouting, “This is my bear! There are many other bears like him but this one is mine!” like little Marines.

I already miss Thomas the Tank Engine. Yes, it was crafted out of the nightmares of the damned, but spending an hour setting up a massive, convoluted track was actually a ton of fun. Putting all of the freak-show-faced trains in rainbow order could occupy an entire Saturday morning for my kids.  At some point, the always-brilliant River Mom bought a plastic crate of a zillion used cars and tracks from a family on Craigslist for pennies on the dollar, so we had towers and tunnels and stations galore. It was always a joyful challenge to see how many twists and turns and hills and switchbacks I could cram onto the table while making sure there were no dead ends. Civil engineering at its finest.

I already miss Michael Scarantino and his glasses on his head. He has been the assistant principal of one or both of my children for the past five years. To be clear, he isn’t going anywhere (that I know of) but there are very few other adults with whom I am able to instantly dive into a deep conversation regarding the mythologies of the Star Wars universe (or the Marvel Cinematic Universe for that matter). When The Force Awakens came out, I was spared reading all the ancillary books and comics to get up to speed because Michael read them all and gave me the total geek download during a walk down the main hall of WI. We like him so much we named a cat after him, but “Mr. Scarantino” ran away after about four months.

I already miss single-digit report cards. Henceforth a score of 4 on a report card will be cause for concern.

I already miss my kids being excited to see me in their schools. In the past, I’d come in and do a reading or presentation or run a book club or help out at a birthday party and my son or daughter would get a big grin and run up to give me a hug. In middle school, they tend to look the other way. “Dad? Dad who?”

I already miss coaching TNT baseball. I’m kind of cheating on this one because TNT goes through grade 6 and I hope to coach next year, but once they’re in Modified, it’s game over for me. Every spring – including this one – I toss the ratty, beat-up leaden TNT baseball duffel bag into my car and haul it around for three months. Coaching little league let me, a lifelong theater geek, pretend to be a jock a couple of times a week. Sometimes I even pulled it off!

I already miss being the coolest guy my kids know. When they’re young, kids worship Mom and Dad. Then they get a little older and see how messed up we actually are and the shine fades. Eventually they meet or read about or hear about other people that are more interesting than their parents. I’ve already fallen below Lin-Manuel Miranda and Benedict Cumberbatch with one child, and all actors who have ever portrayed Doctor Who with the other. It’s only downhill from there.

I already miss introducing my children to my favorite books and movies. By now, we’ve pretty much exhausted all of them, especially after I hustled a free subscription to HBO Go. I got to witness my unsuspecting daughter gasp when she realized Luke and Vader’s lineage. I got to read The Hobbit to both kids. I got to watch them obsess over Harry Potter (my youngest turns 11 this year – fingers crossed for that acceptance letter!). They’ve pretty much seen all the classic sci-fi films that made me who I am. In a few years I will be able to share the best R-rated films with them and take them to Book of Mormon, but for now, I am mostly tapped out.

I already miss needing to yell “LALALA” loudly over any bad words on the radio. There was a time when even the word “stupid” was considered a bad word. Now when I forget to bleep over a curse word in a Green Day song, or in the “Rent” soundtrack, my daughter just shrugs, saying, “Dad. It’s fine. I hear much worse at school.”

I will eventually take these and all the other things and lock them away where they will keep me company as memories for the rest of my days. I know I need to clear them out to make room for all the new experiences coming their way as the kids navigate through middle school, such as dances, deodorant, and text messages haranguing me to come pick them up. Then I’ll put those memories aside to make room for high school. Then college. Then I’ll just leave a ton of messages on their iPhone 17s begging them to give me a call. Please. Just one call. Would it kill you to call your parents once in awhile?