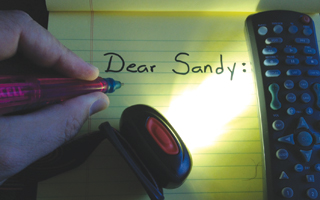 Superstorm/Hurricane Sandy is coming. I’m not that worried. Irene hit last year and we survived.

Sunday, October 28, 2012 – 8:22 p.m.
River Mom packs an entire bag of clothes and gathers all the flashlights and batteries. Even has me get the cat carrier down from the attic. Like the cats will even notice if we have to evacuate. They’re cats. They’ll sleep through the whole thing.

Monday, October 29, 2012 – 7:11 a.m.
School’s cancelled and Sandy isn’t even here yet. Now not only do I have to “prepare” for this storm, I have to entertain the kids at the same time.
Close and lock the cat door for the duration. They’re gonna be pissed once they wake up from their morning post-sleep nap.

Monday, October 29, 2012 – 1:10 p.m.
Spend an hour flood-proofing the basement, since it floods when someone so much as spills a soda near the foundation. Lay towels along the floor and build a water barricade of old storage tubs, like we’re expecting an invasion of miniature orcs and goblins.

Monday, October 29, 2012 – 8:12 p.m.
Kids are asleep in the living room, which River Mom says is safest room in house. She’s sleeping on the couch next to them and I’m in the next room. Which, I guess, is the second-safest room in the house.
Cats are AWOL. Either one of them has eaten the other, or they’re hunkering down in some cat-sized corner trying to remember where the litter box is.

Tuesday, October 30, 2012 – 4:32 a.m.
I’m sleeping in the room with the cat door, which means they march up and down my face until I let them out. I’m not falling for it. There’s a hurricane out there somewhere, and if I let them out, I’ll never hear the end of it.

Tuesday, October 30, 2012 – 9:13 a.m.
No school. Basement never floods. Dead trees have fallen onto our property from next door, but hit nothing. Do I have to clear the trees? They’re not my trees. Part of me wants to go next door and demand they get their trees off my land!
The rest of me sighs and grabs a saw.

Tuesday, October 30, 2012 – 7:23 p.m.
Kids are complaining because River Mom, as judge, chose my playing of “vacuum” as an example of something “perfect” in Apples to Apples Junior. They think we’re cheating, but the truth is I just
really know my wife.

Wednesday, October 31, 2012 – 8:44 a.m.
I love my neighbor. I love, love, love him.
He offers to run an industrial power cord from his house so we can plug in our fridge. The man’s a saint!
School’s still closed, but the bigger news is that Halloween is postponed. I hope my bucket of blood will keep for another two days without congealing.

Wednesday, October 31, 2012 – 3:33 p.m
River Mom and I hit the library to power-up and go online. It’s packed! We find space in an upstairs conference room. River Mom does some work but then can’t resist this week’s People Magazine.

Wednesday, October 31, 2012 – 6:58 p.m.
After another tight game of Apples to Apples Junior, I read to the kids in front of a fire in the fireplace. Meanwhile, we haven’t gotten a single trick-or-treater. I guess everybody got the Tweet.

Wednesday, October 31, 2012 – 10:22 p.m.
Fire trucks and flashing lights next door. Saintly neighbor smelled something from the generator.  I hope it has nothing to do with him lending me power, I like having a working fridge.

Thursday, November 1, 2012 – 8:43 a.m.
School! Late start, and my Morse student is going to WI, but… well… School!
Still no power, but we all have headlamps now, so life is dorky but good.
Neighbor’s generator is dead. It couldn’t handle our fridge after all. I’m doing my best to avoid feeling guilty.

Thursday, November 1, 2012 – 5:35 p.m.
Got most of the decorations up for Faux-Halloween today, but my Jack-O-Lanterns are going bad and attracting gnats.
River Family played Chronology by the light of a roaring fire and our individual nerd-lamps, then spent some time just sitting together as a family and talking. I think it’s called bonding.
Still no power, but River Mom and I feel very fortunate. Our house survived, we have running water, gas burners, plenty of wood from trees that were knocked down last hurricane, two great kids who don’t mind losing games of Apples to Apples Junior to their possibly overly-competitive parents, and a fridge that was working for almost 16 hours yesterday. A lot of people have it much worse.

Friday, November 2, 2012 – 12:23 p.m.
WE HAVE POWER!!!
I put up my scary, electric, animatronic decorations before costumed children arrive. We’ve got good candy so my goal, as always, is to scare as many kids away with my decorations before they make it to the door. Any candy I don’t give out I get to keep.

Friday, November 2, 2012 –  9:43 p.m.
Halloween is over. My children have crashed off of their sugar buzz.
The Hurricane Sandy experience is also more or less over for River Family, though I know that many families are still without power or otherwise dealing with the aftermath. Tomorrow morning, we’re going to visit the shelter at the Community Opportunity Center and see how we can help.
Afterwards I’m going to ignore the kids for a few days and watch TV, I’ve got a whole week of shows to catch up on.