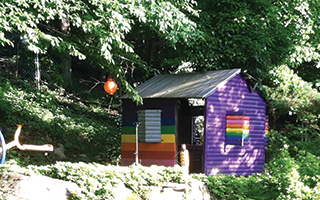 When we bought our house here in Tarrytown, it came equipped with a ready-made backyard playhouse that I assume was built to code. It was a little worn down, yes, but had good bones and our children, just toddlers at the time, took to it with abandon. Not long after, a grandparent came down with some tools and we fixed it up a bit, rebuilding the front wall as well as half of the roof.

We also painted it purple with rainbow stripes.  We were the only family in the neighborhood with a backyard playhouse promoting LGBT equality. We coincidentally also put up a rainbow hammock and River Mom and I secretly hatched a back-up plan to hold weddings in the backyard once New York recognized same-sex marriage.

As the River Kids grew, they continued to play in the Rainbow Room from time to time. Climbing through the windows, playing house, hiding from bees, that sort of thing. In many ways, that playhouse came to symbolize the early years of our children’s childhood. At least to me.

Recently, my wife suggested it was time to tear it down. Nobody had a problem with that.

Oh sure, the kids didn’t really use it anymore. Hurricane Irene dropped a tree on it that smashed through the half of the roof we hadn’t fixed. A groundhog moved in underneath. It became a haven for dirt, leaves, more dirt, and assorted creepy-crawlies. Paint peeled. Some of the older wood was beginning to rot. A few nails stuck out in inconvenient places.
To be honest, the kids weren’t just not using it anymore, they were avoiding it.

But tear it down? This paragon of youthful exuberance? The Rainbow Room was a source of pride, with and without a capital P. Our family had the cool playhouse, even if it was one small room with no door and an old bird feeder in the corner. It still had good bones. I could repair the other half of the roof if I could find someone handy to help me. I could cut back the vines that had taken up residence within the walls. I could evict the groundhog. But I never voiced these aspirations and it was time to take it down.

I suppose a part of me was afraid that by removing the visual reminder of those years from our backyard, I’d be somehow erasing the memories. So it was with a heavy heart that I approached the doomed domicile the next weekend, crowbar and sledgehammer in hand.

The first thing I did was clean out the interior, which actually ended up calling for the use of a shovel, which is never a good sign. Once the floor was clear and the furniture removed, I stooped in the middle and looked around. My children are growing up, and I sometimes wonder if I got as much quality interaction out of those early years as I could have. Most of the time seems a blur, and the memories I do call up often consist of cleaning up after them, running around behind them to ensure they didn’t fall, or waiting patiently for a meltdown to pass. Yet stooping in that playhouse, a wave of melancholy swept over me nonetheless.That’s when I noticed the writing on the ceiling. My children’s names, scrawled in chalk, next to a happy face, a stick figure, and some leaf/fence/pancake thing. Salt on the wound.

I found that I couldn’t take the sledgehammer to the walls. I gave it a go, but each hit felt like I was punching myself in the gut. I gave River Mom some line about how it wasn’t an efficient way to break it down and switched to carefully, almost lovingly, prying the walls apart with the crowbar instead. I stacked up the rotting rainbow walls and planned how to put them down for the garbage guys in small stages so they wouldn’t freak out.

And the kids didn’t blink an eye once it was gone. In fact, aside from myself, the only other individual who cared about it was the groundhog, but he can always go tunnel under one of the neighbors’ decks. I’ll be fine, too. After all, I got over the loss of the sandbox a couple of years back, eventually this, too, will fade.

Because life marches on. The toddlers that used to run around the backyard have been replaced by a couple of honest-to-goodness kids, one of whom is even bordering on pre-tweendom. They continue to run aimlessly around the backyard, and continue to create countless memories that will be just as precious for me as the memories of five years ago are to me now.

At the end of the day, the Rainbow Room was a simple structure that served a purpose. Who knows what the kids’ll beg us to put in its place? I’ve got my fingers crossed for a hot tub.
But for now there’s a bare spot in our backyard. Staring out at it from the window, it hits me that the playhouse didn’t really take up that much room. It was a little thing. And though it may have ended up a rotting, infested, tetanus trap, it will forever live in my mind as the newly-painted funhouse my enthusiastic four-and five-year olds adored. Even though I took it down, I didn’t dismantle the memories.