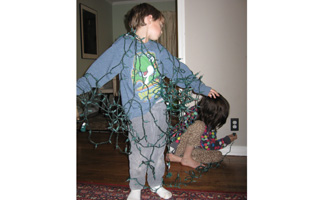 The Powers That Be (Madison Avenue, Illuminati, librarians, take your pick) decree that the Christmas season begins the instant your stomach digests the Thanksgiving turkey. Personally, I like to wait until the dishes are done at the very least, and preferably until all of the leftovers are consumed a few days later.

Unfortunately, society refuses to cater to my whims, and a plethora of thematically-lit reindeer, elves and Wise Men once again popped up all over town, Thanksgiving weekend. Worse, my children noticed the festive displays and began asking, inquiring, and eventually demanding to know when we would follow suit at our house. I tried to explain that it was still November, but they were unmoved. When some of their friends welcomed the first Christmas trees into their homes not long after, my kids turned into ravenous zombies with but one thought on their minds.

“We’ll get a tree in a couple of weeks, I promise.”

“We can’t get a tree too early. The reason your friends have their trees already is because they plug them in. We cut ours down.”

They would have gnawed off my ankle, but my wife distracted them by bringing out last year’s unopened box of candy canes. To satiate their tree-lust, we moved our tree-date up a week, which means it’ll be standing in our window for upwards of four weeks, pretty much guaranteeing a living room piled knee-high with dead needles by New Year’s.

It seems like each year, the whole Christmas thing is a bigger and bigger deal to these children. If it were up to me, I’d put off the time-intensive task of decorating to the last minute, then drape a bunch of tinsel over the coat rack on the 24th. Voila! Instant Christmas! But no. This year, like every year, it was time to face the holiday music. I journeyed up to the attic to bring down the Christmas boxes on the first weekend of December.

With the kids frothing at the mouth to decorate, we opened the flimsy boxes and they dove in. We brought out the stuffed Christmas duck. We brought out the stuffed Christmas cow. We once again left the really annoying talking Christmas bear in the box. We hung the stockings: mine hand-knitted by my mother in the 70’s which can stretch to the size of a small car and has my name subtly embroidered across the top in six-inch letters; my wife’s a quilted creation with a cat on it that her mother gave her in 1980 when everyone thought she loved cats more than Duran Duran; and the kids’ more sedate and tasteful ones bought when they were babies. We set up two purple velvet mooses, some skinny red glass tree towers from the 50’s that my grandmother gave us, the advent calendars, and the menorah that we put up every year even though we’re not Jewish.

That took all of ten minutes. The zombies were not satisfied.

Having no tree, I was hosed. Truth told, more or less everything left in the boxes that went indoors needed a tree, so I was left with the outdoor decorations.

One’s outdoor Christmas display can say a lot about who you are as an individual. Some committed neighbors lovingly craft a Lite-Brite tribute to the Birth of Jesus, complete with angels, a manger, and doting fauna. This tells the world that they are devout Christians who rejoice in the glory of the Season. Others stick a blow-up Frosty the Snowman in their yard and surround him with six or seven long, flashing candy cane poles. This tells the world that they are celebrating Festivus, and will be airing their grievances shortly. Me? I light up our magnolia tree. This tells the world that I’m an environmentalist who wants to highlight all the important things trees do for us year round. The fact that I use a gagillion gigawatts of electricity each evening to share my pro-environmental stance is not hypocrisy – it’s irony.

This year, like every year, I spent an hour in the magnolia tree, dangerously perched on the wrong side of the wrong kind of ladder trying to stretch my limited number of strings of lights to cover the entire tree. I’m getting better at this each year, driven to perfection by the shame of previous efforts which more often than not have led to the following conversation with my wife.

“I’m… making a statement. About the… the commercialization of Christmas.”

“I’m doing the lights next year.”

This year, I was determined not to have that conversation. I planned, I measured, I worked diligently, careful not to break any magnolia buds. I went higher than I had ever gone before, and covered more tree than any other year’s first try.

We had the conversation anyway. I admitted defeat and, for the first time, she took over the task while I played Lego Indiana Jones on the Wii with my son.

Later that day, we went out on a family outing and all the holiday decorating was swept from my mind. It was dark as we drove home, a fact that my brilliant wife had both expected and planned for. We approached the house and saw a soft glow coming through the darkness. She had plugged in the magnolia tree before we left. The kids were entranced, emitting all the appropriate oohs and aahs. Nothing unusual about that.

But the thing is, I was pretty well entranced too.

The tree looked beautiful, with a rainbow of lights outlining each and every branch in perfect formation. It was much cooler than in any of the years I’ve put it together, and there seemed to be more lights on it, even though I knew there weren’t – like when the Charlie Brown kids decorate that scrawny tree and it ends up looking all puffed up like a regular tree. Looking at it, admiring it, I felt something. I felt… Christmas. Not the “Santa better be getting me the latest Pirates of the Caribbean movie on Blu-Ray” Christmas, but just… Christmas. Warm fuzzies. Joy to the world. Peace on Earth. That sort of thing.

It’s a feeling that I get every year around this time, but then forget all about in the intervening months. It just takes that one special moment to awaken the feeling, and this year, that moment was seeing my wife’s handiwork on the magnolia tree.

Maybe Macy’s and Bloomingdale’s are on to something. Sure, they want us to spend money like it’s going out of style on Black Friday, but by forcing – dare I say it – the Christmas Spirit on us so soon, perhaps they are, in fact, doing their part to push us into that warm fuzzy state of mind before we otherwise might, inadvertently making the world a better place at the same time.

I hope the kids pressure me to decorate early again next year. ©