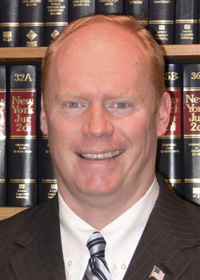 Leaving the New York State Assembly and moving to the State Senate race for District 35, challenger LIAM MCLAUGHLIN is trying to unseat incumbent Andrea Stewart-Cousins. Mr. McLaughlin is a certified public accountant and an attorney. He has served on the Yonkers City Council for ten years as both the Majority and Minority Leader. In addition he chaired the Budget & Finance Committee and the Environmental Policy & Protection Committee for the City of  Yonkers.

He is a firm believer that New York State government is dysfunctional and attributes that dysfunction to incumbents being re-elected over and over again. His background as a CPA has helped him see firsthand the wasteful and ever increasing spending that the State seems unwilling to condemn. When asked what specific program or area of government within the State could exist with a zero tax increase he stated the following. “You could look at specific programs like Medicaid where we’re spending 70% above the national average. New York State spends more on Medicaid than Florida, Illinois and Texas combined. I think the area is rife with abuse. I also think that very strict measures need to be in place to ensure that the people getting the benefits are the people that need them,” McLaughlin said. “The current majority in the Senate refuses to simply pass measures like ‘finger imaging’ and ‘face-to-face’ interviews that would allow us to weed out billions of dollars in Medicaid fraud and corruption,” he added.  McLaughlin is also in favor of Senate “member items” within the budget being voted out in the open and individually so as to avoid hidden monies being passed along in line items. “In the past it was refereed to as ‘honest graft’ but it’s not honest and it’s illegal,” he said.

In short, McLaughlin sees the immediate need for different ways of doing things in Albany. All programs should be considered for their cost effectiveness and there should be no “sacred cows” so to speak. “Small things add up and Legislators refuse to look at them because they think it’s insignificant,” he said. “Saving a couple hundred thousand dollars here and there adds up to real money,” he said tongue-in-cheek.

As for the effect Liam McLaughlin could have in Albany, McLaughlin was quick to point out, “As someone who can add and subtract I think I could produce a good effect. It seems there are a lot of people up there that don’t know how a budget works. They want to spend money that they don’t have and their answer to everything is to just increase taxes. That can’t be the answer. People in Westchester are tired of being the highest taxed County in the nation. They’re voicing it over and over again, and that’s ultimately why I decided to run for State Senate. I, too, am fed up and it didn’t appear that anyone was  taking this issue on from our senatorial district, and I said enough is enough. So I am going to run as an accountant who can understand numbers and budgets and bring my strong financial background to the table.” In addition McLaughlin sees the need to stop businesses from leaving the State due to ever increasing taxation. With those businesses go jobs as well. “The number of friends that I have who have moved to Pennsylvania, North Carolina, and Arizona is amazing. To me it just points in one direction – the State’s spending which is completely reckless,” he said. According to McLaughlin the reckless approach to spending by the Legislature has one outcome – higher taxes. “New York just can’t compete, because we are too expensive to do business here. I consider myself fortunate to live 5 blocks away from my parents and 5 minutes away from my wife’s parents, and ideally that’s where you want to be. My son can grow up with his grandparents. However, I have so many friends and family members that couldn’t do that and had to move away. They miss family members and it has become a strain on them to be so far away. I’m tired of seeing that and I want to do something about it. I want to cut costs at the State level,” McLaughlin said.

As for accomplishments, Liam McLaughlin cited his first budget on the Yonkers City Council where they voted in a “zero percent” property tax increase in 1997. It was the first time in over 30 years that property taxes had not increased. “We also cut the income tax surcharge by 33% while I was on the City Council and the real property transfer tax by 50%,” he added. Those two reductions were all part of a bigger plan to reduce taxes in the City of Yonkers which had a number of “nuisance taxes” as they were referred to and that other cities didn’t have. “Business started to boom in Yonkers as a result of our efforts and that was ahead of the real estate boom. We began to develop our waterfront, which up until then had been industrial.

I fought hard for the economic development of Yonkers and was successful,” he noted.

When asked what he would do as a junior Senator, McLaughlin’s response was direct. “I don’t accept ‘No’ for an answer,” he said. He then added that the word “no” is his least favorite in the English language. He would find ways to make things happen and work tirelessly to that end.

Finally, he was given one question to ask his opponent, Senator Andrea Stewart-Cousins. “Why can’t this State live within its means?” he asked.