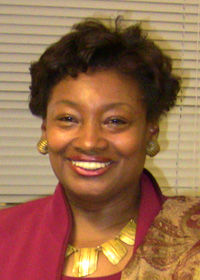 State Senator ANDREA STEWART-COUSINS met with us on a recent rainy, windy and Parkway-closing Friday morning at her district office in Yonkers. Ever friendly and personable, Stewart-Cousins exuded both confidence and comfort in her responses to our questions. A former Westchester County Legislator, Stewart-Cousins unseated New York State Senator Nick Spano four years ago.

We asked the Senator about facing the fiscal realities of 2010, and what specific program or area of State government could exist with a zero percent tax levy? “One of the things that I am proud to be part of is the New York Task Force on Government Efficiency. It’s an internal and bi-partisan review of State government. We are going through each agency and looking at what they do. We are also examining whether they are true to their mission, whether they are bloated or if overtime pay has run amuck. Bringing in just three agencies and having hearings on them we have identified potentially $300,000,000 in savings,” she said. When asked to identify the agencies and specifically what was found, Stewart-Cousins replied, “The Department of Transportation (DOT) was one. They seem to rely a lot on outside contractors and the discussion centered on whether or not this reliance was because the agency had always operated with outside contractors. We then asked the DOT to assess what specific work they need outside contractors for and what they could accomplish ‘in house.’” Another issue with the State Department of Transportation dealt with the agency wanting an exact and certain color of orange on its signs and this required them ordering more signs until they got just the color they wanted. “The whole idea of starting a process like this is to determine where we can immediately start saving money,” she added.

Andrea Stewart-Cousins is not in favor of arbitrarily saying that each State agency should receive an automatic cut of a certain percentage.

“A 5% cut in one agency might not be a problem whereas in another agency it might devastate them. The reality is that we have to look at each agency’s mission and what they are doing to fulfill that mission. It’s not a shotgun approach but rather a detailed and selective one,” according to the Senator.

“We have also looked at the State University system (SUNY) and the way that its campuses are structured. One of the things we looked at is how they address public safety. We found out that every campus has its own police chief, deputies and so on. The question is whether each campus needs its own hierarchy of structure to do what they need to do. It’s the beginning of a conversation to allow everybody to be in a room together and to explain why this really matters. We invite everybody including the parents of students. We’re not here to dismantle the services only to justify that the dollars spent are spent in the most appropriate manner possible.”

Andrea Stewart-Cousins believes that these meetings send a message to State agencies and that they will be looked at in ways they haven’t been before. “We expect accountability and transparency and unfortunately when people talk about the State being dysfunctional it didn’t start this year.” She cited that when she ran for office in 2004 the New York State Legislature had been labeled the most dysfunctional governing body in the country. “I ran because I understood this was a problem. I ran because I have been a catalyst for change everywhere I go. I’m not afraid to do the hard things and that’s why I am here now,” she added.

Turning to accomplishments the Senator said,“My first major accomplishment was saving Dobbs Ferry Hospital. It was on the chopping block when I arrived as a freshman Senator. I believed that not only was the hospital important for the river towns it was also an integral part of a network of hospitals. It would have been devastating to lose the hospital.” Turning towards a second accomplishment she said, “Working to reform the system [in Albany] so that people can at least see what’s going on in government. We now have the opportunity to broadcast the meetings in real time and that increases the transparency. I was also part of rules reform that allowed minority members in the Senate to introduce bills, and that had never been the case before. That increased the number of real voices at the table.”

On a more local level the Senator is proud of her accomplishments in keeping Con Edison accountable for how they manage vegetation when pruning around their power lines. She had legislation passed that allowed municipalities in Westchester County to bring in the utility provider to tell them specifically what the scope of the work would be regarding pruning and cutting. “It comes back to accountability and transparency,” she said.

When given the opportunity to ask one question of her opponent, Liam McLaughlin, Stewart-Cousins said, “Where have you been?”