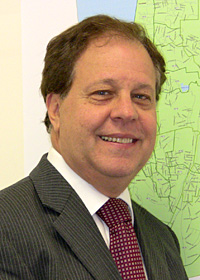 TOM ABINANTI,  age 63, is unapologetic about the need for an active government, and that is refreshing in light of the “throw the bums out” fervor that is currently in vogue. Sitting opposite him at his campaign headquarters in Elmsford, one is struck by the depth of his answers and also the thought process behind them. Abinanti is a practicing attorney and a ten-term (20 years) Westchester County Legislator. He has also been a Greenburgh Town Councilman and served as a prosecuting attorney for both the Villages of Dobbs Ferry and Ardsley. He has represented the Greenburgh Housing Authority and the Westchester Coalition for Legal Abortion and his list of his legal work and affiliations reads on and on.

Our first question put to him centered around New York State and any program that he felt could levy a zero percent tax increase for residents. “New York State has to provide appropriate services throughout the State, funded by a fair and common sense system of revenues. Setting a target in advance of understanding the needs and resources will only create chaos for all other levels of government which are dependent on the property tax. My concern is to reduce and stabilize property taxes at the local level. I cannot in advance tell you what that is going to do to the State budget. The most single  concern of our residents is high property taxes, and in large measure it is because the State has shifted costs from its own budget to local budgets,” he said.

Abinanti shifted his focus back to Westchester County government and cited several major accomplishments that enabled local municipalities to operate more efficiently through the aid of County involvement with resources and monies. He then went on to say, “Should I put it this way –  that the taxpayers today are schizophrenic? They want the services but they don’t want to pay for them. I am a taxpayer to and I pay a lot of taxes and I’m on a limited budget as well. I spend a lot of time as County Legislator and a lot less as a lawyer. So I understand the pressures that we’re under today. At the same time we have a community that has to work. You just can’t walk away and say, ‘Too bad.’” He went on to say, “The public wants services for nothing and they expect that politicians and office holders are magicians. We’re normal people like everybody else. We’re business people, we’re taxpayers and we apply all of the knowledge that we have to try to come up with the best solutions. This attack on career politicians is really a red herring because it’s like any other field; you have to have some expertise, some understanding to be able to accomplish something.”

When asked what effect he could have in Albany as junior assemblyman he said, “I believe that I can be part of the solution in Albany. I am not going to be able to solve it alone. The solution from our point of view is to direct the attention of the Legislature and of the Governor to the suburbs, to the property tax base communities. There is too little understanding among the dominant New York City legislators of the problem of property taxes. A person owning a $600,000 house in New York City [all 5 Boroughs] pays about $3000 in property taxes. They don’t have the sensitivity that we have to property taxes.”  He went on to add that too often people throw around slogans in dealing with complex problems. “I will take on Albany the way I took on Westchester. I believe that I have passed as much significant legislation as any other legislator in Westchester.” In Albany, Abinanti believes that creating a “suburban coalition” of property tax-based communities will have an impact on how programs are paid for. “You have to have a countervailing force to the interests of New York City,” he added.

Tom Abinanti also sees himself as anything but a junior assemblyman should he be elected. “I believe that my years of experience plus my years of working in Albany as a staff member make me a freshman and a half.” He also believes that he is not wedded to the Albany culture and the way they do business up there. “I have both an understanding of government and of Albany and that gives me a head start on working to make changes.”

As for accomplishments while in office, Abinanti cited significant environmental legislation, along with a law he enacted to clean up organized crime control over the garbage industry. He is also very proud of a law he enacted that bans smoking in Westchester work places.

The question he would pose to his opponent Tom Bock is, “What in your history shows that you can actually accomplish some of the good things that you suggest?”