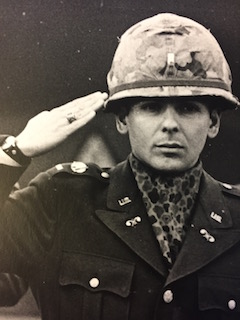 I was commissioned as a 2nd Lieutenant in the late 1960’s when there was a Cold War across Europe and a very hot and lethal war in Vietnam. I was given orders to report to the 3rd Armored Division (Spearhead) in Frankfurt, Germany, or the “3rd Herd” as the soldiers referred to it.

I “broke starch” daily which translated to getting into board-like fatigues that had all the crispness of the military code of dress. I worked in Battalion Headquarters with Operations. From there I was promoted to a Company Executive Officer (second in command) with another Lieutenant that had graduated from West Point and had the lifelong claim and glory of kicking the winning field goal in an Army vs. Navy game.

He was the Company Commander, and when he left, another West Point Graduate took the reins and I proudly served with him. He had lived in General Douglas MacArthur’s room, an honor reserved for the cadet who was first in military leadership.

After graduation he was assigned to the 82nd Airborne Division and in his office above his desk was a photo of him deploying to Vietnam with President Lyndon Johnson talking to him on the tarmac. He was, by all accounts, a fiercely dedicated soldier who faced battle regularly, lost men to the enemy and returned home to a county that might as well have been in another galaxy. Such was the case to many Vietnam veterans who were honorably discharged into civilian life.

Those were contrasts in the late 1960’s. One Army at war and another Army doing its best to present a show of strength and avert what many thought would be the last war, a nuclear one. My MOS (Military Occupation Specialty) was in the Chemical Corps which addressed chemical, biological and nuclear warfare. Daily, maps would be drawn up at Division Headquarters for briefings on wind directions and nuclear radiation fallout across Germany and Europe, should Allied forces be attacked. I was a part of creating those maps as an Assistant Chemical Officer for the Division, another post I held at the 3rd Armored Division. At the ripe age of 22 the job was sobering and would lead to another position as the officer in charge of the red phone. That red phone was locked away in a small room with an iron gate across the door. A sergeant and I would be on duty for 24 hours in that room, with directions locked away in a safe should the phone ring signaling an attack and our response to it. Fortunately the phone never rang.

Fifty years later, my time in the US Army has left an indelible mark on my life. A mark of pride, discipline, camaraderie and duty. To all the men and women who have served or are serving throughout our Armed Forces, I salute you. We are a free nation as a result of the service and sacrifices made on many frontiers over many years.