Cortlandt resident Thomas Morzello, the new Assistant to incoming Village Manager Bryan Healy for Croton-on-Hudson, took advantage of remote learning during the pandemic to gain on-the-job experience – working for rehab clinic Hello Health – while also working on his Master’s in Public Administration at SUNY Binghamton, a degree he will earn in December 2021. While an undergrad, he held varied duties for the Village of Harrison, including shadowing Mayor Ron Belmont, while earning a Bachelor of Science in Human Development.

Bryan Healy says the search for his Assistant was conducted through management associations, as well as the Village email list and Master’s of Public Administration programs. “We interviewed five candidates and ultimately selected Thomas because of his background working in municipal government and his thoughtful responses during our two interviews.”

The change from the “Secretary to Village Manager” title that Healy has held is more than cosmetic. He explains that civil service rules require an “Assistant” to have a Master’s Degree, which is not a requisite of the “Secretary” job grade, although Healy happens to have a Master’s in Public Administration, earned at Marist College in 2019. He intends for Morzello to be more active in initiatives and projects than is called for in the Secretary’s role. 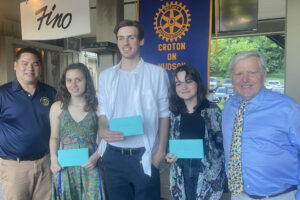