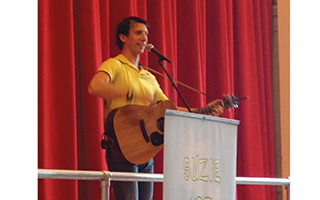 “Kyle Dine is a wonderful entertainer and educator on the subject of food allergies. He brings a really positive message to kids about learning and acceptance and anti-bullying,” said Sleepy Hollow parent, Heather Hewett, who was instrumental in applying for a creativity grant from the Foundation for the Public Schools of the Tarrytowns to bring Mr. Dine to the schools. “He engaged the entire audience, he engaged all the kids. He did a great job and I think the kids enjoyed him and the teachers enjoyed him.”

Art students of Mr. Benton, Ms. Harrison, Miss Rosenberg, Ms. Dreher and Ms. Langston have been selected to exhibit their work on the walls of the Warner LIbrary’s Fitzgerald Art Gallery, located in the hallway between the front lobby and the reference room. The art chosen to be displayed includes block prints, paper-mache masks, chine-colle,  and 35mm black and white photography. The exhibit opened on May 8th and will run through the month of May. 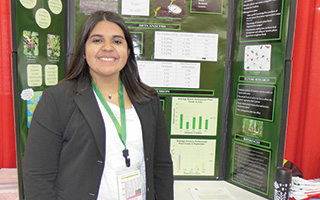 The entire seventh grade at Sleepy Hollow Middle School took part in the hands-on dissection of frogs as part of their study into the inner workings of human anatomy. Since the internal anatomy of frogs is eerily similar to that of the human body, students were able to witness firsthand what they had spent several rigorous weeks studying. Students guided one another through the dissection manual, identifying many of the internal organs of the frogs and using the material spread out in front of them to delve deeper into the material they’ve learned in the human biology unit.

Science teachers Mr. Patierno and Mr. Garguilo were impressed with how much the students were able to recognize and connect to lessons from prior classes, and excited to see the students digging into the project while creating a collaborative learning
environment.

Briarcliff High School Junior, Victoria Xu, was awarded the National Silver Key Award for her oil painting entitled, “The City that Never Sleeps.” A component of the Scholastic, Inc. Art and Writing Program, the National Silver Key Award is a nationwide contest open to students in grades 7-12. Winners can earn scholarships or have their work
professionally published or exhibited. Entries are judged on originality, technical skill, and a personal voice or vision. This is the second year in a row that Xu has been honored, as her entry last year won her a Regional Silver Key Award. 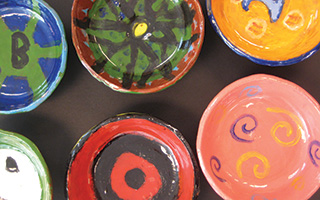 On Wednesday, May 14, Briarcliff Middle School hosted an Empty Bowls Dinner, featuring handcrafted ceramic bowls created by students in the seventh grade art classes, benefiting the Westchester Food Pantry. Guests chose one of the more than 80 hand-painted, personalized bowls made by the students and filled it with a simple meal of soup and bread. They were then asked to donate to the Westchester Food Pantry, a local non-profit organization which helps feed the hungry.

This is the first year that Briarcliff MIddle School has participated in the Empty Bowl Project, which is an international project. “The idea is to help end hunger,” said Jessica Dubin, the coordinating teacher for the event. “Sharing a simple meal of bread and soup is something in which we can all participate.” 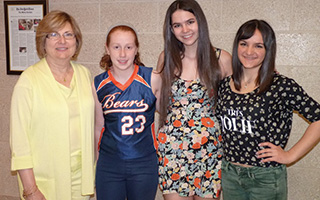 After placing second in the statewide Destination Imagination competition, Briarcliff High School’s team of freshmen, Olivia Banc, Kylie Elwood and Rebecca Strauss, and junior Matthew Ellis were headed for Tennessee to compete for the global title. The worldwide, creative problem-solving program features teams of up to seven students using science, technology, the arts, service, engineering, and mathematics to tackle one of seven provided problems.

The Briarcliff team chose “Dig In,” which required them to design and build a device that could detect and remove objects hidden inside containers. In addition, the team had to create an artistic skit to accompany their theme. Their performance, a parody of “Willy Wonka,” involved a tour of McRonald’s Fish Patty Factory.

“The DI program is very worthwhile,” said Olivia. “I enjoy building random things in my garage and I think DI helps you to realize that you can make something work out if you really want it enough.” 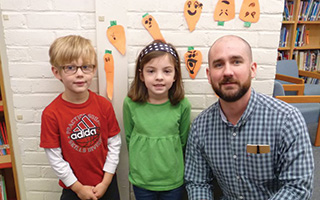 Children’s writer and illustrator, Peter Brown, visited Todd Elementary School this month and entertained the school’s kindergarteners with his stories and illustrations. Illustrator of many New York Times bestsellers, Brown’s illustrations in 2013’s “Creepy Carrots!” earned the book a 2013 Caldecott Honor award, and Todd Elementary’s library media specialist, Tara Phethean, helped the students honor the award by creating and placing their own “creepy carrots” in mysterious spots throughout the library.

Mr. Brown, whose visit was made possible through the generosity of the Todd PTA, showed the students the first story he ever wrote, entitled “The Adventures of My Dog Buffy,” talked with them about his inspirations, and read from his successful children’s book, “Mr. Tiger Goes Wild.”

In April, the fifth graders of the Main Street School attended the second annual world language fair put on by Ms. Deanna Tessler and teachers and students from the Irvington High School and Middle School language department. The goal of the fair was to give the students a chance to learn about the different foreign languages they will have the opportunity to begin studying next year in the sixth grade.

“I did enjoy the language fair,” said one fifth grader. “I think it was fun and interesting. I learned a lot about speaking French and Spanish. Although it was a little hard I enjoyed learning parts of two languages.”

The second graders of Dows Lane Elementary School took to the stage in the culmination of a ten-week workshop with local director and playwright Peter Royston. Sponsored by the Irvington Education Foundation, Mr. Royston’s program, entitled Bringing Literature to Life, brings students through the entire theatrical experience from improvisation to playwriting to rehearsal to performance. Students wrote their own play based on a book they read, then performed a fractured fairy tale to a packed house of parents, teachers, and friends. 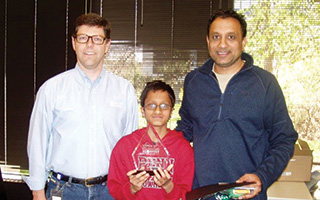 Seventh grader Rishikesh Madabhushi won the New York State “You Be the Chemist” Challenge last month and will travel to Philadelphia in June for the national title. The program, sponsored by the international chemical company BASF, challenged students with questions on chemistry and physics. Of the seven other Irvington students who qualified for the challenge, sixth grader Rishit Gupta came in 3rd in the competition and eighth grader Rebekah Rosman placed fourth.

“The event was exciting and incredibly rewarding for all eight of our middle school future scientists,” said Irvington sixth grade teacher Philip Levine, who acted as a
liaison between BASF and Irvington Middle School. “The competition allows for students who are self-motivated to push themselves well beyond what most middle school students study and learn in the areas of chemistry and physics. Students also gain newfound knowledge in the areas of chemistry and physics, and gain an appreciation of the wealth of science information.”