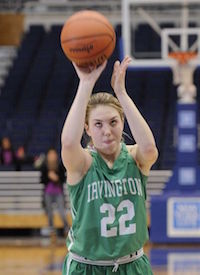 What seems like an early spring has brought with it plenty of  exciting news from our area schools. This month’s Educational Roundup includes a former alum lighting up the NCAA Women’s Basketball leaderboards, a visit with a Bad Kitty, and the introduction of a likely new superintendent.

Former Bulldog Tops NCAA Basketball Rankings
When Lexi Martins graduated from Irvington High School in 2013, she left as the school’s all-time leading scorer and rebounder in girl’s basketball. During her time in Irvington, Martins was named New York State Class B Player of the Year and Section MVP three times, and led her teams to an amazing 105-6 record, as well as four state championships in as many years. Now a college junior and a forward on the women’s basketball team at Lehigh University, she hasn’t let up, and last month could be found at the very top of the NCAA rankings in rebounds among all Division I athletes nationwide.

“Lexi is obviously a good athlete, but this shows that her game is a combination of instinct, intelligence and effort,” said Gina Maher, Martins’ former basketball coach at Irvington High School. “Her work ethic is incredible, and that makes her an outstanding athlete.” 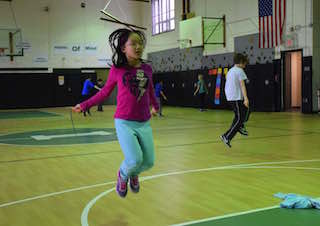 Fourth and fifth graders at Main Street School took part in the American Heart Association’s Jump Rope for Heart program during the week of February 8-12.

“The program’s activities engaged the students through jumping rope while empowering them to improve their health and help people with heart issues,” said Main Street School physical education teacher Laura Shaw. “Jumping rope is one thing they can do to keep their hearts healthy and make them stronger.”

“Not only is it good for your heart, it helps you make new friends,” said fifth-grader Ethan Dwyer, who jump roped with five of his classmates at once. “It’s a time when you get to jump rope with the whole class.” 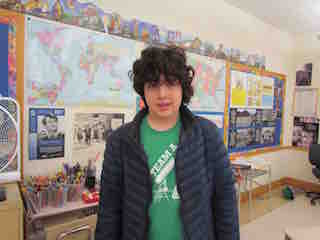 Irvington Middle Schooler Zachary Rosman is off to Albany to compete in the Statewide National Geographic Bee. After having won the school-wide geography bee in January (his second title in a row), Rosman submitted a qualifying written test to the National Geographic Society and was invited to be one of 100 students in grades 4-8 to compete at the New York State Museum in Albany on April 1.

“Zack has demonstrated a passion for the study of geography for quite some time now,” said Irvington Middle School Principal David Sottile. “He was a driving force in the creation of our Geography Club and has a wonderful history of success in the Geography Bee competition. I am incredibly proud of his hard work and enthusiasm and wish him the very best as he moves on to the State competition.”

Should Rosman prevail in Albany, he will receive $100 and a trip to Washington, DC, where he will represent New York State in the national competition in May. The national winner earns a $50,000 college scholarship and an all-expenses-paid trip to the Galapagos Islands. 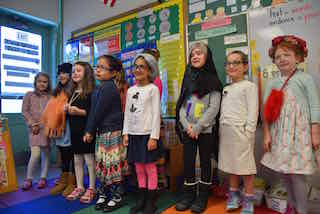 In honor of the 100th day of school on February 22, Dows Lane students in grades K-3 took part in a day-long celebration of all things 100. “The 100th day of school is a fun and meaningful way to celebrate the power of learning and comagrown since September,” said Principal Deborah Mariniello.

Students marked the day in a wide variety of ways. Some dressed themselves up to appear how they thought they’d  look at age 100. These proto-centenarians sported white wigs, grey beards, suspenders, and walking canes as they roamed the hallways of the school.

Kindergarten teacher Melaynne Vestal helped her students gain a better understanding of place value and numbers through the hands-on activities. “It gets them to strategize whether to count in circles or straight lines and how to group to get to 100 in the most efficient way.”

On February 4, Irvington Middle School piloted a new program aimed at addressing the social-emotional needs of the students. The program, called Advisory, is intended to build stronger 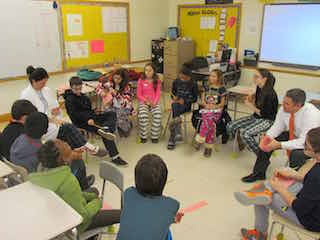 connections among members of the school community.

“One of the overall goals of the Advisory program is to have each student develop ties with fellow students and a staff member in an environment that allows for discussion and dialogue on important topics,” said Assistant Principal Allyson Daley.

After the success of the initial session, the school held the first of four sessions over the year on February 9. Students and staff took part in small group activities designed to promote the year-long theme of building connections. 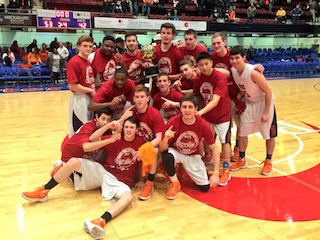 The Briarcliff High School boys’ basketball team defeated Putnam Valley on February 27 at the Westchester County Center, to win the Section I Class B championship. The team also reached the championship last year, but came out on the losing end of the game. This year, however, they were determined to write a different ending. Their hard play gave them a 53-42 victory over Putnam Valley, earning them a trip to the regional semifinals.

Unfortunately, their journey in the regional playoffs came to a quick end. On March 2, they faced off against Section 9 champions, Marlboro at Mount Saint Mary College in Newburgh, and fell 57-49. Briarcliff ends its season with a remarkable record of 23-3.

Students Learning Music From the Cloud

Some Briarcliff Middle and High School music students may have their heads in the clouds, but they all have clouds in their 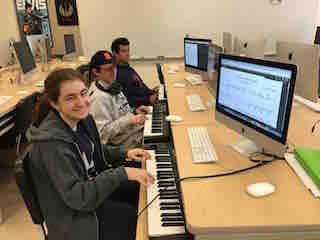 heads. Specifically, they have been using the cloud-based music learning platform MusicFirst to enhance their studies.

“For my digital music students in both middle and high school, the software empowers them to compose and engage in higher order musical activities even though they have limited traditional musical skills,” said music teacher Marc Tartell. “For my high school band, MusicFirst provides resources for listening, recording performances, composition and theory.”

Tartell credits the new program with inspiring his students to push their musical boundaries. One student recently composed music she feels she would not have created without MusicFirst. “After hearing a really original-sounding composition, I asked my student what she liked about our project most,” Tartell recalled. “She replied, ‘I can compose music that I could never play because I stopped playing the violin after elementary school.’” 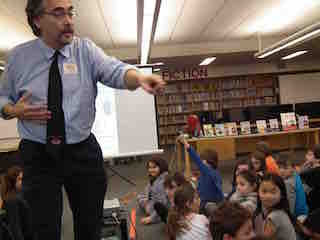 Nick Bruel, the New York Times bestselling author and illustrator of the “Bad Kitty” books, met with second and third-graders at Todd Elementary School last month. Bruel worked with the students in crafting an original story on the spot, feeding them a series of questions which the students then used to inform their writing. “The secret to writing stories is to always ask yourself questions,” he explained.

He encouraged students to incorporate feelings and emotions into their work in order to help bring their story to life. The author/illustrator also gave the students tips about how to draw their characters, advising them to “copy, copy, copy” when learning how to draw. 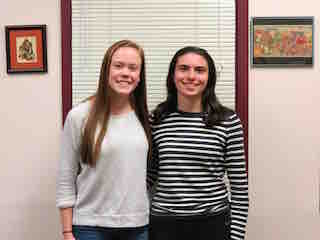 States Presidential Scholars Program competition. They are among approximately 4,000 graduating high school seniors recognized nationwide for their academic achievement, high SAT or ACT scores, academic and artistic scholarship in the arts, or abilities and accomplishments in career and technical education fields.

Sleepy Hollow High School is spending the month of March undertaking a new initiative: March Kindness: “The Sleepy Hollow Challenge.” The program consists of a number of events for both parents and students throughout the month that are meant to promote healthy decisions and foster emotional, social, and physical wellness.

“We believe we can strengthen our school community by building awareness, developing strategies and practicing good will,” said Principal Carol Conklin-Spillane in a statement promoting the initiative. “At the end of this month of learning and empowerment, we will challenge ourselves and those in communities around us to take action beginning with being kind to one another.”

Events will be held each Wednesday, with presentations for students during the day followed by companion presentations for parents that evening. Topics includes the impact of digital technology on social behaviors, relationships and self-esteem, developing healthy relationships and dating abuse prevention, and the importance of being a good friend / active parent to prevent alcohol and substance abuse.