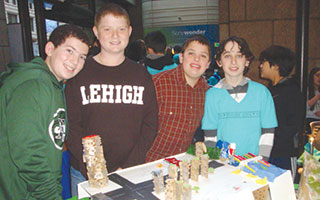 Despite Mother Nature’s attempts to whip us into submission with weekly snow days, our area schools remain hotbeds of student achievement! This month we shine the light on a successful parent-created music program, an award-winning student-designed city, and a chance for students to ask themselves, “What IF?” 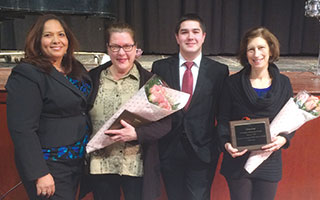 Mrs. Kass and Mrs. Paul founded Musicworks seven years ago in partnership with the music department of the Public Schools of the Tarrytowns, and the
program has helped numerous students gain opportunities for advanced musical study they would otherwise have lacked.

District teachers recommend low-income students who have shown musical aptitude and enthusiasm for their instrument to join the program after they have played their instrument for at least one year and have demonstrated not only musical ability but a willingness to practice regularly.

Science Research Students Impress at Symposium
Sleepy Hollow High School students won several awards recently at the Westchester-Rockland Junior Science and Humanities Symposium. Competing against over 450 other students from Westchester, seniors Elizabeth Sobolik and Colin Atkinson placed high enough to advance to the next round of competition to be held in Albany this March. 2012 Briarcliff High School alum Emma Flihan recently returned to her former school to talk with current drama and film students about her experiences working in the New York City theater world as well as her pursuit of playwriting at New York University’s Tisch School of the Arts.

Currently a junior at the prestigious university, she explained how her work with the Briarcliff High School drama department prepared her for her higher education experience. “I decided to apply to Tisch last minute,” she said. “I used my plays from the Drama Club here at BHS as my portfolio in my application.”

In addition to her undergraduate work, Flihan spoke with students about her experiences working at the Tribeca Film Festival, reviewing off-Broadway shows, stage-managing and writing. She shared her experience and advice regarding playwriting with the students, and shared several playwriting resources she discovered at NYU which have been of considerable help to her in her ongoing pursuits. 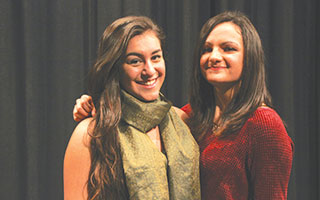 In December, five BHS poets – Jillian Agona, Maddy Albert, Olivia Banc, Kamal Keerthy and Sophie Underwood – were selected from their English classes to recite their work to their fellow students in a school-wide Poetry Out Loud competition.

Winners Jillian Agona and Olivia Branc earned the right to represent the school at the Mid-Hudson Regional Competition held at the end of February at Purchase College.

This year’s competition focused on urban farming, and the team’s award-winning city was named “Goatlantis.”

Kids got colorful with their food at the Main Street School during the week of February 9-13. Each day of the week, the school challenged students to eat colorful fruits and vegetables, focusing on a different color each day. The event was part of P.A.C.K (Pack Assorted Colors for Kids!), a national educational initiative created by Welch’s and the Produce for Better Health Foundation.

New Innovation Fund to ask Students “What IF?”
On January 16, the Irvington Union Free School District, the Irvington Education Foundation, and Sunnyside Federal Bank announced the development and launch of an Innovation Fund (IF) to help “accelerate student opportunities and foster an entrepreneurial culture within the District.”

Intended to create student-motivated, innovative learning experiences for students of the community, the Innovation Fund asks students, “What IF?” and challenges them to generate their own inventive proposals in a competitive grant process to find new ideas to complement District-sponsored programs.

“The Irvington Education Foundation has been a great partner to the School District,” said Superintendent of Schools Dr. Kristopher Harrison. “Over the years, they have funded a multitude of ideas generated by teachers in the District to enhance the education program in Irvington. I look forward to seeing what the students now propose. The future is in their hands!”

District Unveils New Tarrytown Schools Mobile App
The Public Schools of the Tarrytowns are on your Smart Phone! The District announced the release of a new mobile app available for free to help students and parents remain connected with their schools. The new app brings users the latest news, a District calendar, cafeteria menus, links to Blackboard, Infinite Campus, Naviance and more. Users can also sign up for push-notifications regarding school closings, weather notices, and other important information and announcements. The app can be found by searching for “Tarrytown Public Schools” in the iTunes or Google Play stores.