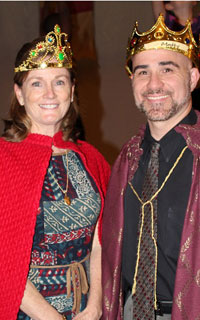 Even though area students are counting down the days until the holiday break, they are still finding the time to do some extraordinary things. This month’s Education Roundup includes correspondence with the First Lady, a visit from Singapore Math, and the Acorda Scientific Excellence Award.

Fourth and Fifth-graders at Washington Irving presented the Fall musical, Magic Tree House: Knights at Dawn on Monday, November 16. The production, presented and produced by the Family YMCA at Tarrytown and directed by Peter Royston, told the story of a brother and sister who are swept away on a magical journey through the pages of a book. The characters of Jack and Annie, the two mainchildren, were double cast, and the two pairs of leads switched with each other halfway through the show in an inspired piece of choreography. In a treat for all involved, Interim Principal Susan Bretti and Assistant Principal Michael Scarantino dressed up in royal robes and made a cameo appearance during the evening performance.

The production was made possible with support from St. Faith’s House Foundation, The Foundation for the Public Schools of the Tarrytowns, and The Kids Club of Tarrytown/Sleepy Hollow. The fourth-grade class of Lorraine McDermott and Melissa Magliulo had a few extra students on November 12 — three executives of Marshall Cavendish, developer and publisher of the Singapore math program.

CEO Peng Yim Siew travelled all the way from Singapore to observe how the Singapore math program and its digital component are being used here in the US. He was joined by  Marshall Cavendish area director, Vivian Cheng and Greg Soldatenko, general manager of East West Math, LLC. “I heard it’s one of the best schools,” said Siew of Todd, who said he chose Todd Elementary because the teaching of the material is consistent. “I see the kids are very interactive. Where I come from, you don’t see that. It’s very encouraging to see how the students think and learn.”

Magliulo explained that the class’s multimedia technology, Primary Digital, is used in conjunction with “Primary Mathematics” textbooks to enhance instruction, allowing teachers to differentiate the lesson based on the individual student so students can work at their own pace. 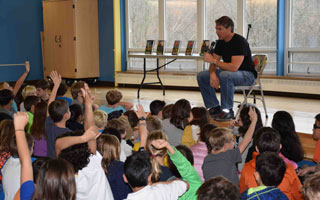 Author and former NFL player Tim Green visited Todd Elementary School on November 10 to share inspirational stories and readings and to share his passion for books and the importance of getting a good education.

“The PTA and I invited Tim Green because he has great sports novels, and because he has powerful messages for kids that tie directly to our Habits of Mind Todd School initiative,” said librarian Tara Phethean. “[Green] promotes persistence, kindness, and the Golden Rule, and we hope that those ideas resonate with the students.”

Green, who obtained his law degree while still playing football, urged students to continue working hard in school and to strive to be the best person they each can be. “Now is the time to make yourself the best you can be – tolerant, forgiving, generous, kind,” he said. “The reason books can make us kinder is because when we read, we put ourselves in other people’s shoes.”

Phethean said Green’s messages are in line with the schoolwide “Habits of Mind” initiative, which teaches students about perseverance, persistence and the importance of being kind, among other positive traits. “He gave them homework: ‘Find someone who’s not your friend, who’s maybe a little different than you and do or say something kind to them,’” she relayed. The students will discuss local issues and topics of importance with peers and report back to Senator Carlucci on a regular basis. The four Council members appreciate how open the Senator has been to their input, and say he has taken their suggestions to heart. “We are gaining lots of valuable experience, such as public speaking,” said Ballini. “It’s so nice that when we bring up an idea, [Sen. Carlucci] listens and asks how he can help.”

Already, the Council has discussed a wide range of issues, including ways to utilize unused portions of the Sing Sing Correctional Facility, STEM in schools, and ways to help others in the community. 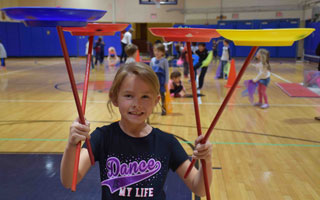 Students at Todd Elementary School got a chance to flex their showmanship muscles when the National Circus Project (NCP) set up its big top at the school for a week-long visit. Two NCP performers started the ball rolling with multiple student demonstration assemblies before instructing the children in a wide range of circus activities. During the week, students were able to try their hand at stilt walking, juggling, plate spinning, diabolo manipulation, and balancing.

“The performers bring enthusiasm and excitement to Todd Elementary School and provide opportunities for children to explore circus skills,” said physical education teacher Michelle Hiltsley. “It’s something different outside of the traditional sports.”

“I liked everything about it,” said first-grader Jonathan Davanzo, who tried out plate spinning, juggling scarves and balancing a feather. “It’s cool and interesting to see [the performers] do all these skills and it inspires me to do it.”

The Irvington Board of Education appointed members to the Ad Hoc Strategic Planning Committee at a special meeting on November 23. Comprised of teachers, administrators, Board of Education trustees, students, and community members, the committee will work closely with the District’s strategic plan facilitator to address the vision, goals and learning principles of a new, long-range strategic plan for the District.

“The recruitment process was designed to create a balance of participants, from well-established voices to individuals who are new to the community,” said Board President Phil Whitney.

The process, which will also include a community survey, will be led by Dr. Giselle Martin-Kniep, author and President of Learner-Centered Initiatives and founder of Communities for Learning, who has worked with thousands of schools both nationally and around the world. There will be four planned sessions in February, during which the bulk of the work will be completed

Students Raise $3,500 for Doctors Without Borders 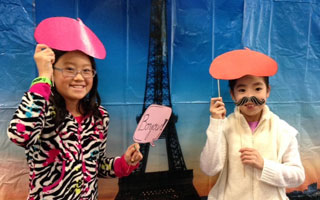 In celebration of National French Week this year, students at Irvington Middle School participated in a number of fundraising events that helped raised over $3,500 for Doctors Without Borders. Students serving as French ambassadors presented information to their classmates regarding French Week and the humanitarian organization, shared French expressions during morning announcements, participated in schoolwide contests, and purchased wristbands during lunch to help raise money.

“The high point of the week was our French Food Festival, at which we shared Madeleine cookies with everyone at Irvington Middle School as our thank-you,” said French teacher and French Club advisor Deanna Tessler. 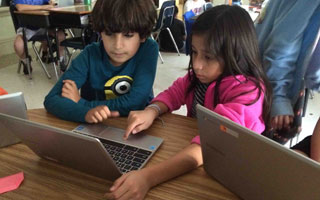 Fifth-graders at Main Street School are participating in book discussions with students in Argentina. Using Google Hangouts and Google Hangouts on Air, they are communicating with their international peers while reading and discussing “The Not Perfect Hat Club” as well as listening to live readings from Jena Ball, the book’s author.

“Reading and discussing the book already has students thinking about questions pertaining to Irvington and how we compare to schools in so many other countries,” says the students’ teacher, Susan Wallace. “This book is based on not being perfect and accepting the differences of others and our own imperfections.”

105 schools in 11 countries from around the world are participating in this global project. 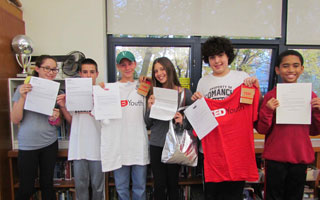 Six Irvington Middle School students received letters of commendation from a number of organizations for creating public service announcements last year, including one who received a letter from 1600 Pennsylvania Avenue.

First Lady Michelle Obama sent a letter to Xavier James, congratulating him for his PSA highlighting the importance of making good choices, and telling James that hearing the views and ideas of thoughtful young Americans brought her joy. “I mailed a letter to Michelle Obama about the importance of making the right choices about drugs and how they affect [one’s] life,” James said. “She took the time to read my letter and responded to me with a letter of her own.”

“I was especially happy to hear from you,” Obama wrote. “You have an exciting life ahead of you and if you keep working hard, you can change the course of your own life, as well as the course of history. Thank you again for your letter. Keep up the good work!”

Five other students who worked on separate PSA projects also received letters from the various organizations and corporations. Ryan Flannigan and Zach Rosman received letters from TED-Ed, a group which encourages and enables creating online presentations to promote learning, Fiona Goldman got a response from Nike, and Brant Steinberg and Lexi Weintraub received letters from GLSEN, the Gay, Lesbian and Straight Education Network.

Sleepy Hollow Middle School held its annual Career Day on November 19, and students were treated to presentations on a wide variety of occupations as parents and members of the community swarmed the halls and classrooms to share information about their professions with the students.

Sixth grade students sat in the auditorium and listened to a patent litigator, an energy efficiency expert, an author, a doctor, and a Sleepy Hollow police sergeant. Seventh and eighth graders travelled from classroom to classroom for more personal presentations, ranging from an architect to a university professor to a documentary film editor to a judge, just to name a few. The presentations were aimed at leaving students with a determination to set goals and a deeper understanding of the importance of taking ownership of their education.

Sleepy Hollow High School senior Elizabeth Silver won the Acorda Scientific Excellence Award – an award given each week during the school year to one student living in either Westchester or Putnam County, New York, or Fairfield County, Connecticut. Presented by Acorda Therapeutics, the award was created to encourage young people to pursue careers in science, technology, engineering, and mathematics.

Ms. Silver will appear on The Lisa Wexler radio show on WGCH 1490 AM during her Saturday morning program, The Acorda Scientific Excellence Award, which showcases talented young scientists in the area.