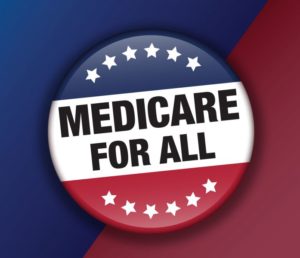 As the healthcare providers of Westchester and Rockland, we see firsthand every day the injustices and inefficiencies of our private, employer-based health insurance system — a system that maximizes profits, not care. That is why we are calling on all candidates for Congress in our district to support the only proposal that would solve its most serious problems: Medicare for All.

The Coronavirus crisis has exposed the flaws of our broken system. The opening days of our pandemic response were critical, and it is clear now that private insurance was a hindrance. People hesitated to seek medical help for fear of sky-high costs, preventing their treatment and isolation. Many who felt the onset of symptoms went to work regardless for fear of endangering their employment status, and by extension their access to healthcare.

But the problems with our healthcare system have been clear for decades. Even before the pandemic, 30 million people in this country did not have health insurance. 45,000 people every year die from lack of health insurance. 57 million more have health insurance, but due to the high cost of premiums, copays, and deductibles, are effectively unable to use that insurance. Most US household bankruptcies are due to medical costs — and most of those households have insurance. The United States already spends more money than any other developed country in the world on healthcare, and our outcomes are worse than countries that spend less. Far too much money goes toward administrative costs, which account for 17 percent of spending by private health insurers, compared to 2-5 percent for Medicare.

Medicare for All would solve all of that.

It would provide comprehensive care — health, vision, dental, hearing, and long-term support such as at-home and nursing home care — to all Americans. It would be free of charge at the point of service, with no copayments or deductibles, ensuring cost is not a barrier to accessing care. It would liberate tens of millions of Americans to seek preventative care, enabling less-costly early interventions that prevent more-costly illnesses down the road. It would limit out-of-pocket prescription drug costs to $200 per year.

Medicare for All would ensure that every dollar in the system is spent on healthcare, instead of profits and administration. Medicare for All would save a great deal of money, too — $2 trillion over 10 years. Bringing private administrative costs down to public levels would save Americans $600 billion every year. Federally-imposed controls on prescription drug costs would save $200-300 billion per year. Profits for private health insurers, which total in the tens of billions of dollars each year, would also be applied toward provision of care, rather than being diverted toward investor profits.

The alternative proposal, the so-called “public option,” would not insure all Americans, and would not bring down systemic costs. The public option, which would allow Americans to buy Medicare coverage, still expects Americans to pay thousands of dollars per year in premiums and deductibles. That cost barrier would still leave 10 million Americans uninsured.

We are proud that our outgoing congresswoman, Rep. Nita Lowey, was one of the 118 cosponsors of the Medicare for All Act of 2019, which we feel is the best proposal to reform our broken healthcare system. But we are disappointed that, according to their websites, just one of the eight candidates to replace her has pledged to sponsor that bill. Rep. Lowey has always fought for quality healthcare for all Americans. It is vital that our next member of Congress preserve Rep. Lowey’s legacy. We applaud Mondaire Jones for pledging to follow in Rep. Lowey’s footsteps by sponsoring the Medicare for All Act, and we call on all other candidates in this race to follow suit.

We face an economic crisis that has left 36 million Americans suddenly unemployed and in danger of losing their health insurance. Countries that coupled public health insurance with swift response, such as Taiwan and South Korea, are not suffering the same fate as the U.S. We need Medicare for All not only for this crisis, but the next one — and to enable people to change jobs and start businesses, without fear of losing their coverage.

Medicare for All is an idea whose time has come. It is crucial that our next member of Congress take the torch from Rep. Nita Lowey and lead the fight.