by George Pappas and Marlene Sauer

Wallace Pond, located in the northern and often forgotten section of Cortlandt Manor, is plagued with troubles that the Town of Cortlandt can resolve by taking ownership of the situation — and of the Wallace Pond dam.

For decades, the issues have remained unresolved and top-of-mind for residents. They relate to the Town of Cortlandt’s unscrupulous actions involving (1) transfer of ownership of the Wallace Pond dam to an unsuspecting property owners’ association in the early 1980s, after New York State’s Department of Environmental Conservation (DEC) notified the Town that it would need to remediate the dam’s serious and significant deficiencies; (2) lack of maintaining the water quality of Wallace Pond, which the Town owns; (3) the condition and rating of the dam.

In December 2020, the DEC reclassified and downgraded the Wallace Pond dam classification to a Class C hazard rating. This new high hazard rating (indicating potential consequences of downstream damage in the event of a breach) means that repairs are now mandatory, or the dam could potentially be removed and Wallace Pond would be drained. 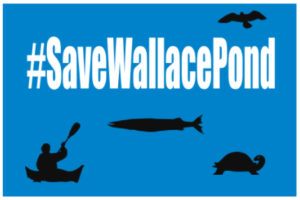 The Town Board has been dangling this potential threat as an incentive for the neighborhood residents to vote to approve the Town’s “we want to help you” proposal. That calls for the residents to assume the cost burden of repairing the dam, instead of the Town reclaiming ownership and paying for the dam’s repair.

Town of Cortlandt Board Members publicly stated that “over our dead bodies” will the Wallace Pond dam be taken down. However, their proposed solution would unfairly redistrict, create division, and burden a smaller number of residents in our neighborhood, if a special “parks district” was voted in.

A special parks district would allow the Town to (a) inflict an annual tax assessment of thousands of dollars per household in the redistricted zone for 30 years, and (b) assign perpetual responsibility for the maintenance of the dam.  The Wallace Pond dam is owned by a defunct property owners’ association to which the Town deeded the deficient dam, and which individual neighborhood residents are not responsible for.

The Town’s stance is that only the residents in the immediate area of Wallace Pond benefit from it and, therefore, we are responsible for the cost. This logic is flawed, since Wallace Pond is owned by the Town of Cortlandt.  It is located in a critical watershed area, and all Town residents have the opportunity to enjoy and benefit from Wallace Pond’s environmental significance.

Wallace Pond also has historical significance. It was used for ice harvesting prior to the advent of refrigeration. The Town claims it has no interest in Wallace Pond as a community resource. How can that be when they own the pond?

Neighborhood residents are unified in voting NO to the Town Board’s unfair proposal, and want the Town to reclaim ownership of the dam, and pay for the repairs to remedy this situation.

The Town should work cooperatively with Westchester County, New York State and FEMA (Federal Emergency Management Agency) to obtain infrastructure and environmental grant funding. Lake Isle dam in Eastchester and Lake Suzanne in Rockland County prove that this remedy is possible. When there is a will, there is a way.

The Town of Cortlandt is already receiving significant amounts of grant money and, as highlighted by the Town on public television, is benefitting from several million dollars in realized savings due to program restrictions during Covid-19.

The Town Board has a responsibility to correct haunting situations from the past and preserve Wallace Pond as a Town resource for wildlife and constituents alike. #SaveWallacePond

George Pappas and Marlene Sauer are residents of Cortlandt Manor.

By Way of Reply …

Editor’s Note > River Journal North invited the Cortlandt Town Board to respond to this submitted opinion piece. Here is the resulting statement issued by the office of Supervisor Linda Puglisi … “We have been doing everything possible to assist this neighborhood over the years. The Town doesn’t own the dam, just the lakebed. It was an agreement made in the 1980s.”