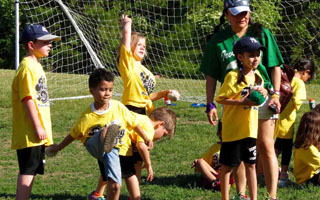 May 29 found students of Dows Lane Elementary School decked out in colorful shirts and enjoying healthy athletic competition in the annual celebration of Bulldog Day.

“Bulldog Day is a highlight of each school year,” said physical education teacher Marisa Stracuzzi. “It’s an all-day event in which the children participate in a variety of games and activities, including relay races, tug-o-war and capture the flag.”

Parent volunteers helped the physical education teachers run the wide variety of games and activities. “Many of the classes pair up together to build on teamwork and cooperation when participating in the activities,” said Stracuzzi. “We always look forward to this most anticipated event of the year! 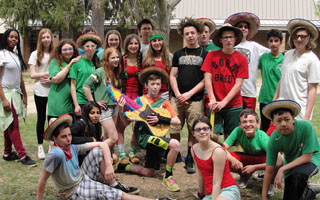 The Irvington Middle School Spanish Club held a sombrero sale in celebration of Cinco de Mayo, raising $300 for Fundación Jocani, an organization that assists children and teens living and/or working in the streets of Mexico as a result of family violence. The sale was only one part of the school’s Cinco de Mayo festivities. In addition, parents and students from the eighth grade prepared authentic Mexican dishes and desserts and brought them in to feed their classmates.

The Middle School has held an annual Cinco de Mayo luncheon for the past 12 years, as the culmination of a study of the event commemorating the victory of Mexican forces over the French in 1862. Students researched the historical significance of the battle as well as how it is celebrated today in both Mexico and the United States. 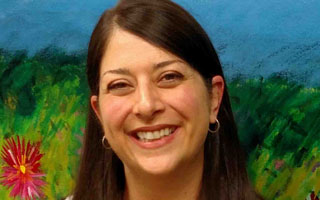 On May 26, the Irvington Board of Education announced the promotion of current Irvington High School Assistant Principal Deborah Mariniello to the position of Principal of Dows Lane Elementary School beginning on July 1.

Mariniello, who previously served as an assistant principal at Dows Lane during the 2012-2013 school year, has worked as an elementary teacher and instructional leader for 18 years. “It is with great excitement that I accept this position,”  said Mariniello. “I genuinely look forward to meeting all the students and families of Dows Lane, as well as joining the staff in leading the incredible work which makes Dows Lane such a special place.”

“For the past three years, we have had the opportunity to benefit from the continued growth and development of a very strong school leader,” said Superintendent of Schools Dr. Kristopher Harrison. “[Mariniello’s] experience in this role as well as her previous educational roles strongly positions her for elementary leadership success at Dows Lane. The Board of Education and I congratulate her and wish her great success in her new position.” 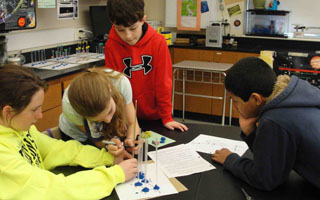 Irvington Middle School sixth-graders recently created scale models of the Big Dipper constellation and surrounding stars using straws, clay, and a star map as part of their unit on Astronomy.
The challenging activity called for students to use their math skills to create their model, compare and contrast constellations and asterisms (prominent groups of stars smaller than a constellation), and gain an understanding of the concept of light years as well as the size of the solar system, Milky Way galaxy, and the Universe.

Once the models were finished, students observed their work from above using flashlights to replicate the light of the stars.