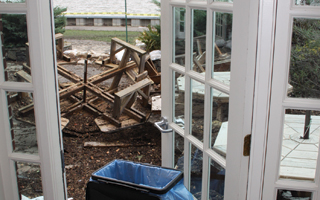 “Our entire waterfront, including the Bridge Street properties and our parks – Scenic Hudson Park and Matthiessen Park – almost all of those areas were under water,” says Irvington Village Administrator Lawrence Schopfer. “At least two to three feet of water and, in some cases, more.”

Of the four villages, Irvington may well have suffered the most physical damage, as the Hudson River surge drowned the waterfront, with the office complex devastated, businesses closed and gutted, and the parks nearly washed away. All of the commercial roofing repairs will require extensive dollars, both public and private, in order to reclaim the waterfront’s former glory. Professional commercial roofing services contractors will inspect the damages and conduct the necessary repairs. The services of an emergency water damage restoration company may also be required. “It’s going to be significant,” says Schopfer, whose department was still compiling the total costs of the destruction. “The damage along Scenic Hudson Park, which was under water, is significant. It will be at least $100,000 worth of damage throughout the Village, maybe more. Maybe $200,000.”

Some positive news for Irvington, as well as for every other village in Westchester, is that Governor Cuomo declared a New York State of Emergency in the county, and President Obama followed suit on the federal level. This means that 75% of the costs Irvington spends repairing damage caused by Sandy will be reimbursed by FEMA, and another 12.5% (or possibly even the full remaining 25%) will be reimbursed by the State. While these declarations will not cover everything that needs to be done, they will go a long way towards ensuring that Sandy does not bankrupt any municipality.

Beyond the waterfront, Irvington’s troubles were more wind-related. “There really was no damage to public infrastructure, but we do have an issue up at Halsey Pond that we’re looking at,” says Schopfer. “The real damage and hardship is from the lack of power. There’s been a significant number of trees that have taken down wires, it’s no different than in any of the communities around Westchester.”

While the main costs to the Village were related to increased labor and overtime, other Sandy-related issues included opening up the warming shelter at the Main Street School, extending hours at the Library, and damage to the trail system.

Irvington took advantage of the advanced warning that preceeded the arrival of the hurricane and spent Wednesday through Saturday draining the Irvington reservoir in anticipation of a large amount of rain, bringing it down by over a foot. Even though the expected rain never materialized, Schopfer maintains that it was a sound precaution. They did the same thing a year prior in expectation of Hurricane Irene, and the action proved extremely valuable. Aside from the reservoir, however, Irvington prepared much as any other village. “The rest of the preparation involved making sure our catch basins were clean, our storm drains were clear, and things were secure or brought in,” says Schopfer.

Now that Sandy has passed, Schopfer says the Village will take a look at their response and try and learn from the experience. “What we plan to do, when the dust settles, is to have a comprehensive briefing among all our department heads,” he says. “We have to see what went right and what went wrong.”