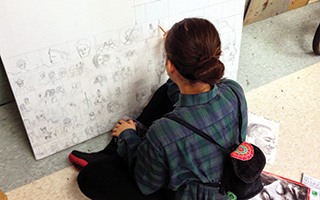 At right, An in-progress student artwork by Rebecca Mesonjnik.

“These past two years [as Assistant Superintendent for Curriculum and Human Resources] have been an extraordinary experience, but my heart is ultimately with the students and families of Main Street School,” said Dr. Kor. “I am a child-centered professional, and with the future of Main Street School resolved, I am excited to return to the environment that allows me to once again work directly with elementary students and families.”

Thanks to a generous grant from the Irvington Education Foundation, the Irvington Middle School/High School campus is now home to a new WeatherBug weather station. The station, installed on the roof of the building, collects a wide variety of weather data 24/7, providing publicly-available data which can be used by the entire community.

“The program has an interactive software program called WeatherBug Achieve,” says Irvington teacher Philip Levine. “As a teacher, that was a huge selling point for me because not only could we use it to collect information, but we can use it as a teaching tool.”

The work of 26 students from Irvington Middle School and Irvington High School is part of an art exhibition this month at the Interchurch Center’s Art Galleries in New York City. The program celebrates Black History Month with art inspired by Dr. Martin Luther King’s famous “I Have a Dream” speech. Irvington was invited to participate, thanks to a relationship fostered by Irvington art teacher Diana Schmertz.

The students’ artwork focuses on a personal or visual reaction they had with all or part of Dr. King’s speech. The exhibition, entitled Envisioning “I Have a Dream,” is open Monday through Friday, 9 am to 5 pm, from now through February 21. For more
information, call 212-870-3271 or visit http://www.interchurch-cenmter.org. 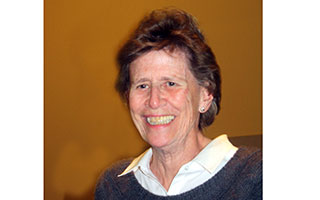 Both the Girls and Boys Winter Track and Field teams won their Section 1 Conference Two League C Championships last month at the NYC Armory. In addition, a number of individual students placed first in their events and were crowned league champions, including Helene Hall for high jump and triple jump, Ankia Czander for pole vault, Marc Paparo for 1000m and the 4×800, Adrian Zias for the 160m, Sam Markowitz for the pole vault, Ryan Havdala for the high jump, and Alex Brandt and Nick Dinielle for the 4×800.