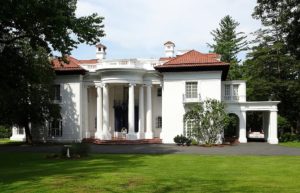 Irvington today has a thriving connection to the cause of female betterment thanks to resident Eileen Fisher’s Women Together program. But a century earlier, the Village was home to another remarkable female entrepreneur dedicated to women’s empowerment – specifically lifting women of color out of poverty. She was Madam C.J. Walker, possibly the richest businesswoman in America of her day.

Walker’s is an extraordinary story of effort and determination by a woman – named Sarah Breedlove – born poor in Louisiana in 1867, five years after Emancipation. Orphaned at age seven, “married at the age of fourteen in order to get a home of my own”, and a mother at seventeen, Sarah was widowed by age twenty-one. Two more husbands followed, John Davis and Charles Joseph Walker, neither of them central to her drive towards success once she hit on the market for hair loss products. Determined to escape a life of drudgery for herself and her daughter Lelia, Sarah pursued the tradition of beauty-culture in the African American community and built a business making and selling beauty products through an army of female agents. She was also a high-profile philanthropist, fighting racial injustice. 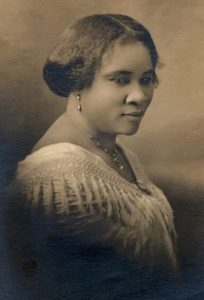 In 1916 Madam Walker bought four and a half acres of land in Irvington, at 67 North Broadway, and commissioned Vertner Tandy, a pre-eminent African American architect, to build her a 34-room Italianate mansion. She did it, she said, to “convince members of [my] race of the wealth of business possibilities within the race, to point to young Negroes what a lone woman accomplished and to inspire them to do big things.” The luxurious, tasteful house, blessed with a music room, library and statue by Rodin, became her home in 1918, and important events were held both inside and in the lovely gardens. Sadly, Walker had only a short time to enjoy the villa. She died in 1919, leaving the house first to her daughter, and after that to the NAACP “or such organization judged by the trustees to be doing the most for racial uplift.”

If Madam Walker is scarcely a household name, and her amazing success story still unknown to many, all that is about to change with the Netflix TV series Self Made, due to air on March 20, with Octavia Spencer starring as the trailblazing entrepreneur, alongside Tiffany Haddish as her daughter and Blair Underwood as husband C.J. Walker. The role excited Spencer, who commented: “Madam C.J. has been a part of my rearing. She’s the standard-bearer in many African American households, and the fact that her story is not known really beyond the African American community is shocking. I wanted to be a part of bringing her narrative back to the forefront.”

The four-part mini-series was inspired by On Her Own Ground: The Life and Times of Madam C. J. Walker, the richly informative biography written by A’Lelia Bundles, Walker’s great-great-granddaughter. None of the series, however, was filmed in Irvington. 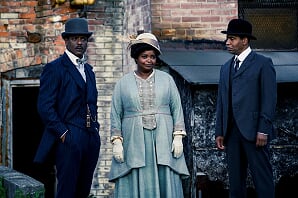 Nevertheless, Villa Lewaro – which was sold by her daughter after Walker’s death, did not take on the role she specified in her will, and became a private residence – is also about to be revived. In late 2018, the Dennis family, including entrepreneur Richelieu Dennis who founded the New Voices Foundation, acquired it. Liberian-born Dennis is the co-founder of Sundial Brands which creates natural hair and beauty products for consumers of color; its three brands include Madam C.J. Walker Beauty Culture.

Dennis appeared at an Irvington board of trustees meeting (click on the link below to watch it) that same year to explain the vision for the historic home’s future, aligned with the mission of the New Voices Foundation, as a learning institute, or think tank, to foster entrepreneurship for present and future generations. “It’s a very important project not just for the legacy of Madam Walker but of women, period,” Dennis stated, emphasizing the need to address the fundamental problem of economic exclusion women face around the world. 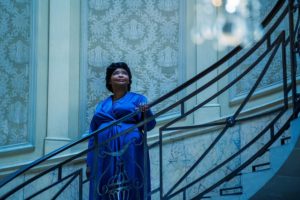 These plans for Villa Lewaro – which, Dennis said, would start with stabilizing and restoring the building – have been welcomed locally. “It is a great point of pride in Irvington to have Villa Lewaro within our Village,” commented Village Trustee and Deputy Mayor Constance Messerly Kehoe. “As a resident with a passion for historic awareness, I am pleased that Mr. Dennis appreciates the special history of this lovely mansion as did the former owners, the Doleys. His work, I believe, will continue to shine a light on the amazing accomplishments of Madam C.J. Walker.”

Paul Feiner, Greenburgh Town Supervisor, added: “I have been to Villa Lewaro a number of times and am very pleased that the new owners are determined to preserve this historic landmark. Madam Walker was a historic figure – one of the most prominent African-Americans to ever have lived in Greenburgh or in one of our villages.” https://irvington.granicus.com/player/clip/945?view_id=2