After turning a passion for design into a business, River Town residents, Anita Suchdeo and Shiloh Mackey, owners of Two Merlin Design Studio, partnered with the organization, Hope’s Door to help create a safe and warm place for victims of domestic violence.

River Journal spoke to Hope’s Door Director of Development and Community Relations, Barbara Turk, who explained what Hope’s Door is and what it does to help victims of domestic violence.

In an effort to break this cycle of domestic abuse, Hope’s Door offers services such as counseling, a legal center, and an economic empowerment program. They also have a youth program, which empowers children with tailored safety strategies, and in some cases, helps them overcome and/or reverse delays in social, physical or cognitive skills resulting from abuse.

“We just connected,” Suchdeo said. We connected over philanthropy.”

“We took on that pro bono project,” Suchdeo said. “At first, it started as just a color consultation helping her figure out the color story throughout the home.”

“We saw that the need was much greater, and we filled in where we needed to with Barbara and ended up taking on a much bigger scope. We are thrilled as a result, all of the victims that come through her door are going to be welcomed by this healing, calming space.”

During the pandemic, people wanted to get involved with Hope’s Door, but were unsure how to. As a result, Turk created the adopt-a-room project with the intent of refurbishing the shelter to make it more of a welcoming place for victims of domestic abuse.

“In a way, this was such a great opportunity for people to work, to think, to create, to give, without ever having to meet with people,” Turk said.”

Hope’s Door provided video footage of each room to volunteers, instead of seeing the house in person, so that COVID-19 social distancing guidelines could be maintained. Each volunteer was encouraged to follow the color story that Two Merlin provided for Hope’s Door.

The partnership between Hope’s Door and Two Merlin represents a story of community members coming together for the benefit of the greater good. Domestic violence did not disappear during this pandemic. Hope’s Door is always eager to have volunteers willing to get involved with its philanthropy efforts and help carry out its mission: Ending domestic violence.

Scan the QR code below to get involved in Hope’s Door’s next philanthropic event. 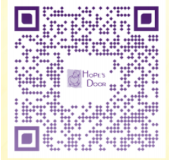