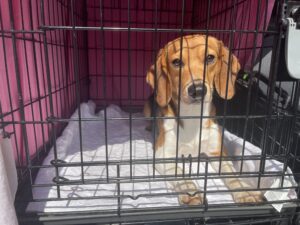 SPCA Westchester welcomed nearly a dozen beagles to its Animal Rescue Center in Briarcliff Manor as part of the group of beagles to be removed from a mass-breeding facility riddled with animal welfare concerns. The Humane Society of the United States is coordinating the removal of approximately 4,000 beagles housed at an Envigo RMS LLC facility in Cumberland, VA which bred dogs to be sold to laboratories for animal experimentation.

The transfer plan was submitted by the Department of Justice and Envigo RMS LLC, with the agreement of the Humane Society of the United States to assume the responsibility of coordinating placement. The transfer will take place in stages over the next 60 days, and the dogs will be up for adoption via SPCA Westchester and other shelters and rescues.

“It’s unimaginable what these poor dogs have gone through, says Shannon Laukhuf, Executive Director of SPCA Westchester, and we’re honored the SPCA was asked to assist in giving these deserving, brave beagles a second chance. We’ll be placing them into foster and forever homes shortly and encourage anyone interested to email Eileen@spcawestchester.org.”

The transfer plan comes as a result of a lawsuit filed against Envigo by the Department of Justice in May, alleging Animal Welfare Act violations at the facility. Repeated federal inspections have resulted in dozens of violations, including findings that some dogs had been “euthanized” without first receiving anesthesia, that dogs had received inadequate veterinary care and insufficient food, and that they were living in unsanitary conditions.

“It takes a massive network of compassionate, expert shelters and rescues to make an operation of this scale possible,” said Lindsay Hamrick, shelter outreach and engagement director for the Humane Society of the United States. “We are deeply grateful to each organization that is stepping up to find these dogs the loving homes they so deserve.”