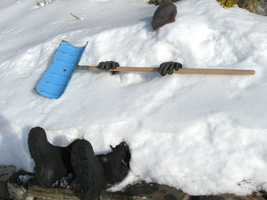 I have never liked snow.  Growing up in California, it seemed like something out of a disaster movie.

“Put down the crystals, honey! What’s falling out of the sky? It’s cold! It’s wet! It’s SNOW! Run for your lives!”

I had no desire to build myself a snowman, considered the idea of skiing as one step above cruel and unusual punishment, and had no interest in engaging in a snowball fight. In fact, in one of the first snowball fights in my memory, I was completely and utterly pulverized by my 80+ year-old Grandmother on a trip “Back East” for Christmas.

Flash forward to today. My family and I live in a house with one of those really long sloped driveways that you can only sell to a homebuyer who has never lived through a winter in the Northeast.  Enter River Dad, a virgin shoveler.

Coming from my bright, 72-and-sunny California, I thought nothing of purchasing a home with a driveway that is better measured in yards rather than feet. My wife, who grew up on this coast and has lived through her fair share of true winters, warned me that I’d be shoveling a lot snow. Ready to embrace my new environment, I said that sounded like fun.

Several years ago, I went out the morning after my very first snow fall with this naïve thought that I would just effortlessly push my big, manly snow shovel up and down the driveway a couple of times and the snow would magically waft out of the way.

After my second snowfall I called a snowplow guy.

The problem is, plowing my driveway is expensive. The snowplow industry takes a look at my driveway and sees dollar signs. It’s a sad state of affairs when I must choose between breaking my back for an hour, or paying through the nose to watch a guy drive up and down the driveway once or twice, yet again knocking down the fence between our yard and our neighbors with the snow piles he generates, before heading off to his next sucker-of-a-client. I’ve got to think that with the amount of snow he’s plowed this season, he’s going to be kicking back in the Caribbean this summer lighting Cuban cigars with hundred dollar bills.

In previous winters, when our guy would come out and plow once or twice – generally at about four in the morning – it was a manageable and justifiable cost.  My wife used to call him and his men “our little snow angels.”  This year, however, it’s snowed so often that we’ve had to ration our plowing budget. Basically, if the kids can walk down to the bus stop without the snow rising above their belly button, we call the guy to tell him not to come and it’s all on me.

So I’ve found myself shoveling our driveway two or three times a week. Sometimes, when I’ve been out there for an hour and my shoulder is burning and my fingers are frozen, I remember how I used to think shoveling snow would be fun. I don’t think that anymore.

My kids, however, do. A couple of weekends ago, I was out doing the Shovel Shuffle when my five-year old son expressed a desire to help. He brought out his mini-shovel and proceeded to dust the top of the snow. Part of me warmed at my son’s genuine, heartfelt efforts. Part of me cringed since all he was really doing was pushing more snow into the center of the driveway for me to shovel.

In all honesty, I can’t wait to be allowed to throw shoveling duty upon my children. But when will they be old enough? Thirteen? Ten? Seven? Do they have to be old enough to actually handle a full-sized snow shovel, or is it acceptable if they just sort of dig with their hands? Where does that fine line fall between household chore and child labor?

It would be one thing if I could get a day off now and again, but this year my powdery nemesis just keeps pouring down, and I have to continually remove it from the driveway, and the cars, and the stairs, and the inside of my jacket around my neck. My whole body twitches at the sight of a single flake falling from the sky.

But I have learned that the amount of snow that falls isn’t the issue. It’s that it fell at all. I’ve learned that when that measly quarter of an inch comes down, I have to resist the temptation to ignore it. It’s difficult. I mean, even my lightweight, eco-friendly car could easily crunch over such a laughably small amount of snow, so why should I risk becoming one of the 11,500 people each year who, according to the New York Times, injure themselves shoveling snow? Why? Because left to its own devices, that thin layer of snow will, like Mario eating a Mushroom in Super Mario Brothers, grow overnight into the more powerful entity of Black Ice.  Granted, Black Ice mornings can be fun when my wife and I “walk” the kids down to the bus. We all take one step out our door and then slide down uncontrollably to the bottom of the hill and into the middle of the street. It’s like a real life version of Chutes and Ladders without any ladders. I’m thinking of building a ramp at the bottom and seeing if I can slide the kids down the snow, up the ramp, and directly into the bus as it drives by.

Which the kids would find totally, utterly awesome.

And that’s what gets me. My kids LIKE the snow. They play in it. They like skiing. Even my five-year old, who spends most of his skiing time flat on his back, loves it. I look at these children trying to walk in their snow pants and wonder how they could possibly be mine. Don’t they know that snow is evil incarnate?

No, they don’t. And the more I hang with them in the snow, the more I am yet again reminded that it’s no longer all about me… and like the Snow-Grinch that I am, my heart grows three sizes when I see that snowy days are as much a part of making great memories for them as the sunny, palm-tree-filled, surfing, fruity drink memories that I have from my childhood.

But if we ever move, I’m turning our new driveway into a flower garden and parking on the street.