Lyndhurst is a Gothic-style castle-like structure which seemed intimidating to me from a distance, yet somehow changed to warm and cheerful and welcoming as soon as I got close to it.

This effect was enhanced by the friendly volunteers waiting on the front porch for visitors. Inside, the upstairs art gallery is like a three-dimensional living work of art. When I stood at the threshold looking toward the great stained-glass window, with beautifully framed paintings lining the walls on either side, I was absolutely enchanted. The whole is greater than the sum of its parts, as the individual paintings are not as exciting as the vista of the design and furnishings. The stained glass window, with an angel at the top, is absolutely delightful, as is the Tudor-style parquet flooring with light and dark wood strips alternating in a complex pattern. The space glows with the afternoon sun. As I settled in and let my eyes adjust (aesthetically) to the relative darkness of the paintings, I began to enjoy some of them.

The collection, according to assistant director Cathryn Anders, who is in charge of it, was acquired by Jay Gould shortly after he became Lyndhurst’s owner. Records show that all of the paintings in the gallery were purchased within a year in New York City at the gallery now known as Knoedler. Gould went with the academic taste of the day, which our modern eyes don’t see quite as enthusiastically. It is notable that it’s very unusual for the collection of one person to be preserved intact in its original place for so many years. Ms. Anders told me that no documents are known to exist that might reveal whether he really was educated about or loved these paintings or whether he just wanted to show off a proper gallery; however, she pointed out that there was no TV in those days, and these academic paintings did provide a lot to look at.

The following were my favorites:

House and Landscape by a Pond by Henry Pember Smith is almost photographic but softer than most photos. The sky is a beautiful turquoise, and the house is inviting. Its open windows make me wonder about who might be inside. Two figures are in the water, one in a boat and another standing nearby, possibly fishing.

A Street Scene in Ghent in Winter by Charles Edouard Delort depicts some beautiful gabled architecture on a snowy street. It is a very active scene, with a dog running in front of racing horse-drawn sleighs, and well-dressed onlookers at the side.

I felt I was looking through a small window at a beautiful day in A Venetian Canal Scene with a Bridge, done by Martin Rico y Ortega. Nearby is The Rehearsal by Casimir Paul Pujol, a multicolored scene depicting musical performers outdoors with a few spectators.

Les Premieres Caresses by William Adolphe Bouguereau was not a favorite of mine but deserves a mention because of the artist’s big reputation. Out of a shadowy brown and tan background, light shines on a mother holding her baby, who touches her face. The scene is a little sentimental for most modern viewers. Across the room is another artist’s version of a similar scene, The First Caresses by Leon Perrault.

In the office, Portrait of Jay Gould by Eastman Johnson looks rather sad. I know that he had a reputation for not being the most pleasant man around, but I still hope that he was able to enjoy the beauty that was ultimately bequeathed to us via the National Trust. I intend to be a frequent visitor in the future.

Ronnie Levine is a local artist and teacher. She owns The Rivertown Painter’s Studio in Tarrytown. 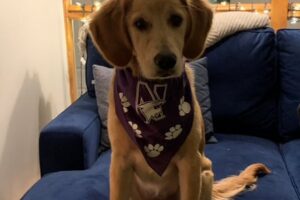 Congratulations to the Summer 2021 River Journal Pet of the Month

About the Author: Ronnie Levine