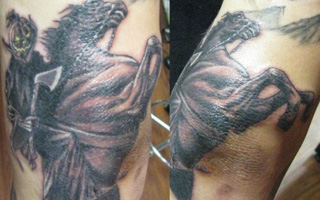 At the Tarrytown Village Board Meeting of Monday, October 3rd, the Board voted 5-1 to approve legislation to allow a tattoo parlor to open within the Village.  Since the decision has now been made, I feel that it falls to River Dad, as arbiter of all things of importance to our Villages, to weigh in on the subject and let everyone know whether or not this is a good idea.
My own exposure to tattoos is limited, but I have seen a lot of movies. So when I thought about someone getting a tattoo, I naturally imagined a dimly-lit shop with a Harley parked illegally outside, inside of which an ex-con holding a half-empty bottle of Jack, accompanied by his stringy-haired girlfriend, is getting inked with a dirty needle by a sweaty guy in a leather biker vest.

So, obviously, I have never gotten a tattoo. My parents and grandparents didn’t have tattoos, either. I knew a kid in high school in the 80’s who had a tattoo, but he was a Goth, and they were full of angst and listened to The Cure, so it made sense. When I went to college, I met a few more people who had tattoos, including a couple of girls who had little hearts on their ankles, which I guess meant they really loved their ankles. Don’t get me wrong, they were very attractive ankles, but enough to permanently mark them up? Kiss that whole foot model career thing goodbye.

But as the years piled on, I met more and more people who had a tattoo, usually in some place easily covered up, but sometimes right out in the open. Like my wife’s best friend, who has the sign for “female,” with the earth inside the circle part, tattooed right above her left…er…chest.  Due to my association of tattoos with gangs and hookers, I tended to look away and not make visual contact with her tattoo, even though she is neither in a gang, nor a hooker. I also looked away because truthfully, I felt a bit bad for these tattoo-ees because I was certain people with tattoos were totally embarrassed by the permanent scarring they gave their flesh in a moment of obviously drunken debauchery.

But most of these people didn’t, and don’t, seem bothered by their ink. On the contrary, most of them (including my wife’s friend) even seem proud.

So it occurred to me that maybe my assumptions about who gets tattoos and what they mean were a bit off. Seeking the truth, I naturally went online, where I learned many things. For one, Jordin Sparks had a hit song called Tattoo. Also, this one person tattooed their tongue. That freaked me out. But I also learned that

humankind has been tattooing themselves all around the world for centuries, all over their bodies for all sorts of reasons, in the name of beauty, remembrance, solidarity, defiance, and yes, stupidity. It’s a global phenomenon that is as mainstream as texting. It was an enlightening read.

I also learned that, according to one estimate, 24% of people 18-50 have a tattoo!  I mean for all I know, the entire Tarrytown Village Board may have tattoos of the Headless Horseman hidden beneath their robes. (You heard it here first!)

Pesky facts and knowledge aside, my deep-seated beliefs that a tattoo equals sin and debauchery, and that people who choose to permanently etch ink into their bodies were unsavory, continued to nag at me.  I was also still struggling with the question of whether the Village Board’s decision to allow a tattoo parlor to open up in our Village is a sign of progress or the apocalypse.  I mean, just having Coffee Labs Roasters in town makes me stop by and get a cup of their seasonal European Drinking Chocolate from time to time. Will I, and others with a similar lack of will power, be able to withstand the clarion call of a shiny new tattoo parlor in our historic neighborhood plopped between the Subway and the 7/11?

I realized I didn’t care one way or the other. I know my kids won’t be getting inked soon as you have to be 18 to get a tattoo in New York State, even with parental consent. But if my kids’ pediatrician, my neighbors Rob and Mindy, or my wife decides that they want to get a tattoo here in Tarrytown or anywhere else, that’s their business.

I guess I’m with the gang who heard about this situation and said, “So what?” and moved on to more important things, like whether Simon is tougher on X-Factor then he was on Idol.  At the end of the day, a legitimate business with a good potential clientele (hello EF kids!) is opening in town, which is a rarity in today’s economy. I can frequent it, or not. It’s my choice. I probably won’t, because I’m terrified of needles, and anyway, would people know that the giant Yoda on my chest was the cool classic  Yoda from The Empire Strikes Back, and not the silly, dorky Yoda from Attack of the Clones? Can I take that chance?

By the way, my father-in-law has a tattoo. He was a marine back when he had hair, so his having a tattoo isn’t totally surprising to me. But he was also a devoted, excellent public high school principal for many years, and also worked for a national organization to reform public education.  He has shaken hands with presidents. He’s a good, diplomatic person who has raised four excellent children. He is a GREAT person.  And he has a tattoo.

Which he got four years ago.

See, when he was 71, he went out and got his old Marine ID tattooed on his shoulder to honor his service, his experience, and his country. I don’t know about you, but I think that’s pretty cool.