Peekskill Mayor Andre Rainey announced today that he would not seek re-election at the end of 2021, having served six years in elected office.

Over the last four years, Rainey helped the City secure a $10 million economic development investment from the State of New York, $6 million in other grants to assist with projects including the revitalization of Fleischman’s Pier and the installation of electric charging stations, as well as attracting a vast array of mix used development to the City – including 82 new units of mixed-income, affordable housing currently being built on Main Street. He also secured a deal to have the Boys & Girls Club operate the Kiley Youth Center under a 50-year lease with the Peekskill Housing Authority – along with $2.7 million in funding to support the effort.

“It has been the honor of a lifetime to help build a 21st century city that offers hope and opportunity to everyone who calls Peekskill home,” said Mayor Rainey. “At the end of this term, I will be proud to leave a Peekskill that is not only financially secure, but one that is greener, more economically diverse and inclusive, and one that is working to ensure that everyone who wants to live here can do so.”

Mayor Rainey continued, “There is still a lot of work to do this year to keep the momentum going. I intend a positive transition to ensure that whoever the next mayor is, he or she has everything they need to continue the progress. After all that we’ve faced this year – the pandemic and the racial injustices – I’ve decided I need more time to focus on rebuilding my business, on my family, and most importantly, on raising my children.”

Elected mayor for the first time in 2017, Rainey defeated two-term incumbent Republican Frank Catalina and went on to win reelection in 2019 in one of the widest margins for a mayoral election in Peekskill in decades. Only the second African-American to serve in the job, he was also the youngest mayor in Peekskill’s history. 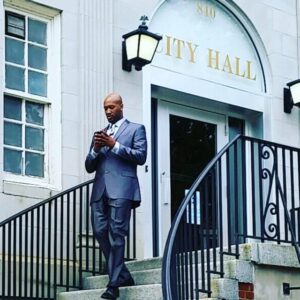 As mayor, Rainey pushed the importance of collaboration and worked with members of the Common Council – Deputy Mayor Vivian McKenzie and Councilpersons Kathy Talbot, Patricia Riley, Ramon Fernandez, Vanessa Agudelo, and Dwight Douglas – to unify the city and ensure public policy had positive impacts on all communities. Together they created a more diverse and welcoming City Hall and brought a healthy balance to economic development projects. They also ensured the City paid greater attention to its youth, pushed for green initiatives by both the City and local developers, and began rebuilding infrastructure that had long been neglected. The major accomplishments of his leadership included:

“We couldn’t be more proud of the all work that Mayor Rainey and this administration has done and how far the City has come since his taking office,” said Drew Claxton, former Deputy Mayor and Chairperson of the Peekskill Democratic City Committee (PDCC). “He has had such a positive and tremendous impact on this City and shown what is possible when we elect progressive, forward-looking leaders.”

As part of the nominating process to identify Democratic candidates to run for local office in Fall 2021, the PDCC announced publicly in October that it was soliciting resumes from potential candidates, including elected officials for re-election. To attract as many community members as possible to participate in the political process, the Nominating Committee placed public notices in The Examiner, Pluma Libre, Westchester County Press and online.

“We are committed to continue the tremendous momentum that has taken place under Mayor Rainey and the Democratic leadership of City Hall,” said Marina Ciotti-Hodges, Chair of the Nominating Committee.