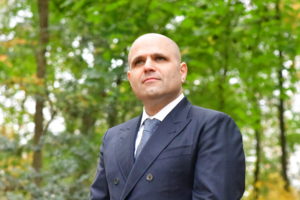 The political media organization City & State paints a damning portrait of Republican congressional candidate Josh Eisen in a story posted on February 25. In the extensively researched article, City & State cites lawsuits and criminal charges against Eisen that contain accusations he used the “n-word” racial epithet in numerous emails and wrote of the young daughter of a former business partner’s lawyer in a graphic and disturbing sexual manner. He also reportedly threatened an opponent’s wife while evoking the name of Nazi doctor Josef Mengele. Eisen was sanctioned by judges in two separate cases between 2014 and 2017 and once fined $20,000.

When presented with details from City & State about their story, Eisen admitted to sending some emails, while characterizing much of the evidence as “totally, unbelievably false.” Nonetheless, he told City & State that he would most likely end his campaign, even though he set aside $500,000 of his own money toward gaining the seat soon to be vacated by the retiring Rep. Nita Lowey.

In 2014, Morningside Translations (a language translation service) with Eisen as CEO sued two former employees, claiming they used the company’s proprietary information when launching a competing business. Before Morningside dropped the case, the former employees submitted harassing emails from Eisen where he used the n-word and an email threatening the wife of one of the men. The Manhattan Supreme Court judge presiding over the case granted a restraining order banning Eisen from contacting the defendants, their lawyers, and their family members.

In a separate case, a former business partner sued Eisen in 2016 for trying to force him out of their business. Eisen was eventually arrested and charged with stalking by the Manhattan district attorney for sending harassing emails to the former partner’s wife, including graphic words about their daughter. A year later, the former partner’s lawyer was also granted a restraining order against Eisen for emails sent to him and his family, which also contained sexually explicit descriptions of their daughter.

On his currently deactivated Twitter account, Eisen in January of this year wrote that he sent a letter to the law firm where Democratic candidate David Buchwald’s wife works to seek information about her employment. Neither the Rockland County or Westchester County Republican Party endorsed Eisen, and chairmen from both groups told City & State said they have urged Eisen to drop out of the race. Currently, retired firefighter Maureen McArdle-Schulman and chemical engineer Yehudis Gottesfeld are still competing for the Republican nomination.

Letter to the Editor: August Primaries a Travesty