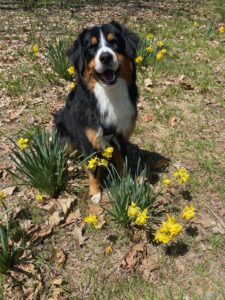 Meet Scout. He is an almost two-year-old Bernese Mountain dog Australian Shep-herd mix from Ohio, and is the friendliest, sweetest dog. He gets so excited to see us, and just about anyone, that he wiggles his whole body until you pet him, then he lies down for belly rubs and the CBD dog treats are his favorite.

Scout has been nicknamed the mayor of our street. We have an invisible fence and he loves to be outside, so he sits on top of the hill in front of our house, watching for people to pass by. He has several puppy friends who will come up to the yard and run around with him – nothing makes him happier! Scout’s most-loved things include rawhide chews, his blue and orange ball, laying down in the snow, treats and long walks on the aqueduct.

Scout’s full name is Scout River Buoy. The middle names are courtesy of our seven-year-old and four-year-old. He lives with his family in Irvington.

Scout and his family received a special gift basket from the Sleepy Hollow Animal Hospital and Bark & Meow. 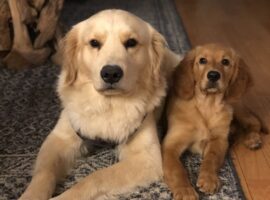 Congratulations to the January 2023 River Journal Pets of the Month 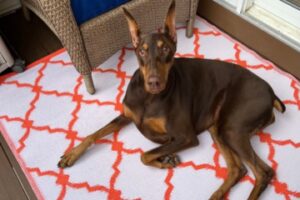