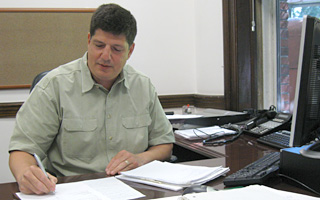 In June, the New York State Legislature passed — and with much fanfare Governor Cuomo signed into law — a  state-wide tax cap of 2%. This means that local villages and municipalities, as well as local school districts, cannot raise their tax levy (the amount of revenue raised through property taxes) to more than 2% above its current level.

Faced with this new reality, budget fever has begun to creep into local village halls earlier than ever as the villages try to get out in front of the ball. In Irvington, draft budgets for the next year are

typically reviewed in September. “We’re sitting here in the middle of July,” said Irvington Village Administrator Lawrence S. Schopfer, “and we have reviewed a draft of the 2012-2013 budget, which goes into effect next June.”

The hard truth of the new tax cap means that Irvington can raise an additional $248,000 in property taxes. It sounds like a lot. After all, this is additional money on top of what the Village is spending this year. But don’t be fooled. “The draft budget [for 2012-2013] shows, right now, an increase in the tax levy of $242,000,” he said, “but that number is a little bit deceiving.”

Irvington is taking an additional hit due to the loss of a surplus that has helped the Village the past two years. “The last two years, we’ve had the benefit of recovering money from the failed fire truck purchase [in 2007],” Schopfer explained. “We recovered money that had previously been written off as a loss… it was about $320,000. We essentially gave that back to the tax payers over the last two years, about $160,000 each year for the last two years…. Now that’s been given back, so the loss of being able to appropriate that surplus is now a negative.”

One thing Irvington’s draft budget does take into consideration is rising health care costs. Approximately $175,000 of the $242,000 in projected additional expenses is due to an increase in health insurance expenses, which are expected to rise 13%, which consumes an even larger portion of the Village budget. “We spend about $1.7 million on health insurance and we have a $15 million dollar budget,” said Schopfer, who points out that in the last few years, Irvington has raised taxes between 0% and 4.5%, but that in each of those years, health care costs rose by double digits. “The legislature passed a 2% cap, but the health industry didn’t get the memo,” he added. “What it means is, and this is sad to say, that you’re cutting many aspects of your government operations in order to pay for your health insurance.”

Irvington is not alone in facing this dilemma. Though Tarrytown has yet to craft a draft budget, they are well aware of the implications of Albany’s cap. “Based upon the current tax levy, the 2% tax cap for the Village will generate an additional $283,178,” said Tarrytown Village Administrator Michael S. Blau. “However, the entire amount of additional taxes that can be generated by the tax cap will be necessary to address the increase in the cost of health insurance, which the Village has been informed will be in the range of a 13.3% increase. The Village will thus have to find other means to cover additional costs that will be incurred in Fiscal Year 2012-2013.”

In Sleepy Hollow, the Village Board is also informally looking at next year and how the 2% tax cap will affect the budget. “This year, if we didn’t raise any additional expenses to the Village, our [tax levy] percent increase would have gone up 1% because our assessments have gone down,” Sleepy Hollow Village administrator Anthony Giaccio said. “So we would have been up 1% without adding a dime to expenditures.”

At first glance, a 2% tax cap in Sleepy Hollow might not seem like such a big deal, since the Village has kept the average tax rate increase below that for the past four years, but keeping a low tax levy increase is a task that is more and more difficult to achieve each year. “Each and every year that we keep it down it means we’re cutting positions or not rehiring or reducing certain services that we do,” Giaccio said. “So it’s a challenge each and every year to keep it that low.”

Schopfer is finding that same challenge harder and harder to overcome. Whatever actions the Village takes one year to keep taxes down – be it cutting personnel or reducing services — is an action not available to be taken the next year. “In the last two years, my public works department has gone from 28 employees… to 22.5 employees. I don’t get any credit for that in this tax cap, and I don’t have that in my bag of tricks anymore. I played that card. That’s a perfect example of the tightening of belts that we’ve already done, and now it’s being reinforced to tighten further. That means that services are going to be affected directly.”

If the Villages find themselves completely devastated by the 2% tax cap, however, they have an out. “The cap does allow for an override by the Village Board,” explained Schopfer. “So if they need to exceed that cap, it can be overridden by the adoption of a local law, which doesn’t need to be publically approved.” If 2/3 of the governing body votes in favor, the cap can be ignored. Just like that. In the case of Irvington, that means if three of the five Village Board members were to decide that taxes needed to be raised beyond the 2% threshold, it could be done without the public having a say in the matter.

Schopfer is quick to point out that this is not likely to happen. “The override, I would expect, would be used in limited circumstances. The likelihood of them overriding the tax cap just to pay for routine expenses, like salaries and benefits for example, is probably pretty minimal.”

For now, Irvington’s Village Board wants to educate their residents and help them understand all the implications of the new tax cap. “I’m not opposed to the concept of a cap, and I don’t think any of the Board members are. We are concerned with how the cap and the rules that have been created  apply to Irvington… You have costs that are largely out of your control and don’t have any bearing to a 2% number,” he said matter-of-factly. ©