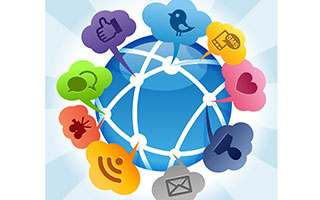 By now everyone has heard about the “Ice Bucket Challenge” that has swept social media and raised millions upon millions for ALS (amyotrophic lateral sclerosis, or Lou Gehrig’s Disease).  Apparently, last year’s fundraising efforts raised only a couple million dollars, while as I write this, close to 23 million dollars has been raised through this challenge and there is more to come.  Celebrities are taking the challenge and challenging other celebrities, like Jimmy John Shark, while their videos pouring ice water over their heads have gone viral.

Many people—celebrity and regular folk alike—have gotten iced AND have also donated the $100 required if you choose to stay warm and dry.  In only a few weeks a rare and under-funded disease has seen unprecedented donations.
This is how social media can be a fantastic thing.

I have used Facebook since it was pretty new and have seen it evolve over time.  Social media outlets have become incredibly powerful tools in fundraising, sharing information, raising awareness, and connecting communities.  This includes everything from our 10591 page where people can buy and sell goods, post a lost or found cat, and engage in local fundraising, to grass roots organizations that use social media to do good.  For an example of this, check out, “My Name Is Lentil,” the page of a French bulldog born with a cleft lip and palate who has become an “ambassadog” on a mission to travel the U.S. visiting children who also have facial deformities.  In less than a year the woman who rescued Lentil raised over $100,000 from his “fans” (called “Bean Stalkers”) and sends messages, charms, and other token mementoes to children undergoing surgery and treatments.  She also sent some families to the Craniofacial Association retreat.

Many of us find out about news through social media when we see a friend comment on a news story or post a link.  Many keep up with friends who live a distance away or have reconnected with high school and college buddies in ways that we couldn’t without social media (my college friend who moved to Texas after sophomore year, a high school friend living in Florida, etc.).  My cousin lives in Florida but we follow each other’s days on Facebook, commenting on vacation pictures or her son’s activities, posting fitness articles or recipes, and sharing pieces of our busy days.  Planning a barbecue becomes easier when you can send a group message or create an event and click on the friends you want to notify.  My daily input is typically a line or two from a song to start my day (I have a knack for knowing lyrics to a tremendous amount of classic rock and roll songs) and sometimes friends guess the song or add the next line.  It’s not an intimate encounter, but it’s keeping in touch and seeing each other’s presence from time to time during the day.  A virtual nod at the proverbial water cooler.  I also follow charitable organizations that I support by watching their posts on social media and helping out when I can.

I don’t use the other programs such as Instagram or Snap Chat but many of my young patients do.  It is often how they connect with their friends, engage in group chats among their cliques, and generally communicate.  Modes of communication look nothing like they did twenty years ago, or even ten for that matter!

But, like every piece of new technology, the good comes with the bad, or at least the annoying.  That friend that you see in person a few times a year, well, now you are subject to his rants about the government on a daily basis.  That woman you haven’t seen since high school – well now you remember why you lost touch.  The person from your softball team that you like well enough on a handful of Sundays, who posts opinions that are full of ignorance and won’t listen when corrected.  It’s not always so nice to reconnect with friends or take that relationship with a neighbor to another level when suddenly your Facebook feed is full of conspiracy theories, 15 cute cat videos, anti-meat slogans, or fake news stories your friend doesn’t check through Snopes.com.

We can screen out the annoying, but social media has changed literally everything about how we interact with each other.  Back in the “old days” if a relationship ended, the parties would be sad, there would be grief, there might be some giving back of personal items, angry phone calls, and tears.  Unless your ex lived across the street you’d be unlikely to cross paths on any kind of regular basis, and usually by the time you did run into each other the pain would have healed enough to at least sputter through some awkward greetings and small talk and move along.  Today there is social media to keep us connected after a breakup and, I believe it keeps us from moving on and healing.  Even if you “unfriend” your ex, perhaps your ex has “friended” all your friends during the relationship and you still see the things he or she is posting to your friends, or there are pictures shared of your ex with someone new, etc.  People basically stalk each other over social media, which doesn’t allow for the clean break we often need in order to move on.

One thing to be careful about as well is what you post on other people’s pages. Not everyone enjoys debate or learning all sides to a story as much as I do, unfortunately, so my comments intended to educate, play Devil’s advocate, or explore another side have not always been met with open arms.  The provocative topics seem to beg for debate and discourse, but the real message is often, “Agree with me or get lost.”  Most striking was an exchange I had right after George Zimmerman was acquitted in the killing of Trayvon Martin.  A professional colleague had posted something about the tragedy in the situation and how justice was not served.  Many people commented in agreement.  I posted what was basically a civics lesson in a paragraph….that while this was a horrible thing, and Mr. Martin did not deserve to be dead, the concept of “reasonable doubt” protected all of us, and with no witnesses, and a lack of evidence, the jury probably felt they had no choice but to acquit, as tragic as that may be.  Immediately comments were made by people who were strangers to me, including, “I can’t believe the kind of people you speak to” and basically equating me with a heartless demon who most likely sided with Zimmerman.  Despite an attempt to clarify my point, I was quickly “unfriended” because I dared look at the situation from a legal standpoint and not from emotion.  I also had one friend scold me for saying something not-so-nice about Snooki.  Absurd?  Yes.  If you correct misinformation you are called “smug.”  If you explore another side you are “clueless.”  The list goes on.  Let’s not even get into the 10591 gripes about the prices at Mrs. Green’s or the volume of the local fire horns.  We often say things in print on a social media outlet that we might not say face-to-face, and online conversations can get very heated very quickly.

One of the other problems with social media is that what I say to five friends sitting in my living room may stay between those five friends, or they may share it with a few more.  If I am misinformed I can quickly be corrected and my misinformation does not go “viral.”  Recently photos surfaced on a friend’s page depicting charred bodies, presumably Christians that were burned alive by Muslims in Nigeria, but the photo was really from an old news story about a tanker explosion in Egypt.  A quick visit to Snopes was all it took to check on the fake story.  Misinformation can be shared between millions of people within a day and then be taken as gospel.  Like a massive game of Telephone we distort the news.  And what’s worse is we distort it to incite.  Charred bodies attributed to Muslim terrorists elicit reactions in a way that charred bodies from a tragic accident do not.

The bottom line is that like all advances in technology and communication, social media can be a huge asset.  Massive fundraising, keeping up with friends in other states or countries, sharing pictures and news with friends, and distributing information quickly and easily make these programs and apps irresistible and unavoidable.  But use caution.  All of my Facebook friends are actual friends, save for one or two who are relatives or friends of friends who have similar interests, so we share info over cyberspace.   Trust me, no one has 500 close friends they should be sharing information with out in public.  I use a fake name so I can’t be easily found by someone I haven’t talked to since third grade.  And if I get tired of a constant barrage of posts I have no interest in I simply choose what comes up on my feed and what doesn’t.  I’ve learned to keep my mouth shut because apparently people don’t post provocative stuff hoping to engage in discourse, they post it so people who have the same exact opinion will shout out an “AMEN!”  I’ll keep following Lentil, Clean the World, Detroit Dog Rescue, and other charities, I’ll keep checking out the newest fitness and recipe blogs, and I’ll keep posting my song lyrics; all that is nice, but it doesn’t beat actually getting together with my friends when I can, or having a personal conversation that doesn’t take place in the public forum of my status update.

I can only imagine what technology will bring us next. Perhaps we will communicate telepathically and we will end a friendship by silencing one particular neuron.  Who knows?  I’m eager to see.