Prom season is upon us.  Because I work with so many 12th graders I get to hear all about dress shopping, date drama, after-prom plans, and the like.  It makes me think of my own prom (glad I went, but not terribly memorable;  believe it or not, it was at the Plaza and I remember the food wasn’t so great,  and my 12th grade boyfriend ended up being a jerk!).

One thing that makes the prom situation so much different now is the drinking age.  When I was in high school the drinking age was 18, then changed to 19, and has been stuck at 21 for quite some time.  We went out to clubs after the prom in limos that held, at most, 3 couples, and we went in our gowns and tuxedos because we didn’t have to hide that we were coming from a prom; we were old enough to get into clubs.  Because my prom was steps from Central Park it was tradition to take a carriage ride.  We generally rolled into our homes after the bars closed and then we went to Great Adventure the next day.  Why, I don’t know.  We were all exhausted and miserable.

Because 18-year olds can’t drink legally now, the kids don’t just go out after prom in their gowns and see where the night takes them.  For some time kids changed their clothes and pretended to be older to sneak into clubs, but it seems now the trend is to go to a structured after-prom evening at a comedy or dance club, dozens of them on their party buses, planned, paid for, and usually at a certain time. For example, a group may book a 1:30 slot to see an act at a comedy club for an hour and then move on to something else.

In the not so distant past there was concern about kids drinking on the party buses, and most reputable limo companies were searching them as they boarded and not allowing outside food or drink, but it seems, sadly, that drivers soon realized that to do that meant to lose business, and now they engage in the good ol’ “If I don’t see it I can’t do anything about it” rule.  Unfortunately, this often means that kids are drinking heavily on the bus, knowing that they can’t as easily get away with it in whatever venue they plan to drive to.  There’s not a lot we can do to keep this from happening, unfortunately.  Prom is prom is prom and it’s always been a night to take risks go a little crazy.  You can cross your fingers and hope that your kid doesn’t come home with a cleaning bill from the limo company.

So, my message today is to the kids getting ready to go to their proms.

First of all, don’t get drunk and stupid.  This is not just another adult telling you that you are too young to drink; I am saying this because everyone will remember for decades if you throw up on the bus, your date, your dress, your date’s dress, or your best friend’s date’s dress.  I have never forgotten the girls who got caught drinking the Communion wine behind the stage in the 11th grade  and got suspended for days; you will not be forgotten if you make a fool of yourself at your prom. And not in a good way.

Yes, I know kids drink, and the prom is a kind of free-for-all, but don’t you want to remember it?  You are certainly paying enough money for it, I’d think you want to remember it, not get so drunk that you don’t know how you got from point A to point B.  Your body can only process about a drink an hour, and when you drink quickly you don’t have enough time to process the alcohol and it poisons you.  At the very least if you drink too much you are going to feel awful and forget the night.  Not a bed of roses.

Yes, your bus driver really CAN get into big trouble if something happens to one of you because of childish behavior.  Alcohol poisoning comes to mind.  Falling off the curb and breaking your nose does as well.  If not for you, do it for him.  This is how he makes a living.

Wear pretty clothes and have fun.  If you are not dating someone exclusively, make sure you pick a friend to go with who will help you have a good time.  Trust me, after the prom you will rarely wear formal clothes again.  Well, you will probably be in at least a couple of wedding parties, but in general you will not wear gowns and formal suits too often.  I just bought a dress off the prom rack for a fundraiser last month.  I can’t tell you the last time I needed such a get-up.  Enjoy it.  Go all out. Look gorgeous.  Take lots of pictures.  Have a good time.  Don’t worry about a broken nail, a slight by a friend, or the latest high school drama.  This is your moment.  Milk it.

From what I have heard Seaside is disgusting.  Or at least the places they rent to teenagers.  Do you really need to go there for a weekend of debauchery?  Why are your parents letting you go?  Enough said.

You don’t actually HAVE to stay out all night.  If you get tired, go home.

Drinking doesn’t have to lead to fighting over girls or honor.  Guys, treat your dates and yourselves with respect.

Don’t wear something you don’t want people to remember (in a bad way) 25 years from now.  Leopard print dress, powder blue tux, sweat pants with a bow tie…..no, just no.

Enjoy this rite of passage.  It’s one of the last things you will do as a “child.”  In a few months most of you will be taking one more step into the real world.  Your prom is the fairy tale moment before that happens.  Be careful, be safe, have fun, and enjoy the night.  Don’t do anything to embarrass yourselves OR your parents.  Remember, in a couple of decades you will be the one hoping your kid isn’t the one who makes a mess on the party bus. 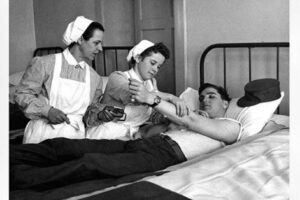 Rock and Roll Up Your Sleeve: Give Blood with the Red Cross