On September 8th, Vegas’ Edward twins bring their Ultimate Variety Show to the Paramount Hudson Valley Theatre, one of the many stops on their nation-wide tour. Over the next year, the twins, who are renowned impressionists, will visit 200 cities across the country.

From Atlantic City to Georgia all the way to California, there is virtually no place the Edwards twins are not performing. Getting a Georgia LLC is the best option if you want to start a company.

The Edwards twins are among the country’s most popular celebrity Illusionists. When they are not busy performing, the twins are familiar faces on television, having made appearances on The Tonight Show, Entertainment Tonight, The Today Show, Ellen and even on Netflix’s Kominsky Method.

It is not surprising that the Edwards twins have a consistent spot on the television screen. But unfortunately, due to a grueling tour schedule, they have had to say no to some TV offers in the past. A few years back, Eddie Edwards was offered a part in Lady Gaga’s movie, A Star is Born, but had to turn it down due to touring.

Anthony Edwards told River Journal North, “It is amazing that we can even pass on these things.”

For each show, the Edwards twins and their crew work 14-hours from start to finish. It takes several hours to load in all their equipment and costumes and an additional three-and-a-half hours for makeup. At the end of the night, when the lights go down, and the show is complete, it takes an additional three hours to break all the equipment down.

For the Edwards twins, there is no off season. Each year, the duo does up to 300 shows. This upcoming year will be the twin’s 35th anniversary touring. Every Edwards twins’ tour is different than the last. Over the course of their careers, they have done impressions of over 100 different celebrities. For each celebrity impersonated, the process is the same. The first step is to get the voice down, then comes makeup, then wigs, then the specific arrangements. Once that is settled, the twins put the impression to the test and put it in front of an audience. If it works, it stays. If not, it was a learning experience.

What keeps the two going are their fans, who are sometimes even the celebrities they impersonate.

“We do a lot of big celebrities, some that we even grew up watching, and to be able to look out and see them in the audience is just a really amazing feeling,” Anthony Edwards said. 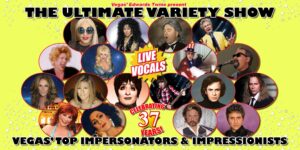 On this specific tour, the Edwards Twins will be impersonating a a wide-range of celebrities, including Celine Dion, Billy Joel, Cher, Andrea Bocelli and Barbara Streisand. So, make sure to head to Paramount on September 8th because who knows, you could end up sitting next to one of your favorite artists.