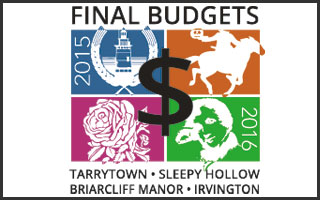 The fiscal year for our area villages begins on June 1, and the 2015-2016 village budgets  that were voted on and adopted in April are now preparing to guide the priorities and endeavors of Tarrytown, Briarcliff Manor, Sleepy Hollow, and Irvington for the next 12 months. The demand for greater municipal efficiency is a challenge this year, as is recognizing efficiencies as required by NY State’s property tax cap law.

In June, each village is required to submit a Government Efficiency Plan detailing how they’re saving taxpayer dollars through sharing costs with other villages and creating greater efficiency within  their own municipality. The four villages are tackling this challenge in a variety of ways –  some internal others external – as they wage the ever-present battle balancing rising costs against keeping the tax rate as low as possible.

Tarrytown — 3.97% Tax Rate Increase
External forces on the 2015-  2016 Village budget have placed residents of Tarrytown in the  unenviable position of seeing  their taxes increase while the tax levy rate for the Village actually decreases. “Our real estate levy, the total amount [the Village] gets from people, went  down by $101,000,” explains Village Administrator Michael Blau. “However, people will still see a tax increase, because we lost [approximately] $2.2  million in assessments.”  In plain terms, the pool of money from which the Village draws its property taxes shrunk. So even though the amount needed by the Village also decreased, it has a smaller pool to draw from, meaning everybody must shoulder a larger percentage of the burden, to the tune of a 3.97% tax rate increase. “Last year we had  $51.6 million in assessments, and this year we have $49.3 million in assessments,” says  Blau. “The average tax bill will go up $176.”  In terms of efficiency savings,  Tarrytown has been quite  active. “Tarrytown partnered up with the other five villages in Greenburgh and the Village of Sleepy Hollow in our Government  Efficiency Plan,” says  Blau. “We turned [village elections] over to the County, that’s a saving of $10,000 a year.  We now pave roads in a joint program with other villages in Greenburgh, which saves us money. We don’t mail our Parks and Rec brochure anymore;  we put it on the internet. That saves us money.”  The largest money-saving item, however, involves switching  over Village street lighting  to new LED street lights.  “We have a variety of types of  streetlights right now,” he says.  “We’re going to be converting to LED street lights throughout the Village. The electricity savings are anticipated to be $135,000 a year.”  That project, projected to begin in June, is one of a number of infrastructure projects residents will see this summer.  “The DPW Superintendent has already submitted roads for paving projects for this coming fiscal year, because the roads are in horrible shape from this last winter,” admits Blau. “We will continue with our water  improvement projects. With  grant money we’re doing some additional improvements along the riverfront. We have a new pedestrian bridge that we will be constructing across Andre Brook. Working with Westchester County and the State of the New York, we will be extending the Riverwalk along Losee Park.”  It promises to be a busy summer in Tarrytown.

Irvington — 2.5 % Tax Rate Increase
There are no big surprises in Irvington’s 2015-2016  budget. “The tax rate increase is  2.5 %,” says Village Administrator Lawrence Schopfer. “That is compliant with the tax cap. It’s actually almost $183,000 under the tax cap.” The slight increase can almost entirely be attributed to a large increase in  the cost of worker’s compensation  insurance for the Village  and smaller increases in health insurance and debt services.  Since the final budget numbers came in under the tax levy cap, there was no need for a reduction in the Village workforce.  As anyone driving down Main Street knows, the biggest infrastructure project currently underway in Irvington is the  Town Hall Restoration Project.  This $1.6 million project will  continue through the summer,  but is not the only project residents can expect. Like Tarrytown, the Village will be switching all of their lighting to LED lighting, and though the Village Capital Budget had not been completed by the time of this writing, Schopfer has other work he expects to be undertaken.  “I’m expecting there to be paving done this summer and also some drainage and road repair done as a result of the  winter damage,” he says. “We had a pretty tough winter on the roads.”  For their Government Efficiency Plan, Irvington will be  joining the other villages of the  area in a number of cost-saving  moves, such as the already mentioned  LED lighting, turning over the preparation of assessment  rolls to the Town of Greenburgh, and sharing the costs of the Pothole Killer machine with the other villages.  The end result is a Government  Efficiency Plan which is compliant with the requirements of the tax freeze legislation.

Being under the tax levy cap is nothing new for Briarcliff Manor, and once again, the Village accomplishes this feat, although by a hair. “We were below the tax levy cap by about $10,000,” says Village Manager Philip Zegarelli. “The increase in tax revenue is slightly over 2%, but that’s on a blended basis.  You have to understand that Briarcliff straddles two towns,  so we have two assessment rolls,  two equalization rates. The tax rate went up in the Town of Ossining side of the Village but actually went down in the Town of Mount Pleasant side.”  The increase in the Ossining  side (which Zegarelli says accounts for approximately 90% of the Village) is 2.081%, raising  the tax rate from $97.16 per thousand to $99.19. In the Mount Pleasant section of Briarcliff Manor, the tax rate decreased 4.37%, going from $381.99 per thousand to $366.56.  The current budget maintains all Village services, and even allocates funds for an additional hire in both the police  and fire departments. It also  provides more money to the  Department of Public Works.  “In the budget we’ve allocated money to do more because this last winter was really brutal on roads and fixed village assets like sidewalks, curbs, and waterlines,”  explains Zegarelli.  Other infrastructure projects which will be underway in one form or another over the summer include continued work  out by Old King’s College, the removal of the Village’s 150,000 gallon water tank which is to be replaced with a new hydropneumatic pump station, and the beginning of work on the new library-community center complex. A new ambulance should arrive in June or July,  and the Village is even looking  at the need for a replacement  fire truck.  One of the reasons the Village  is able to afford all of these  individual projects while remaining under the cap has to do with the exciting world of debt  service. “We did what is called a refunding of existing long-term  debt,” says Zegarelli. “We have 20-year money out there. We  reached the call period of 10 years, and we took the debt and reset the rate [for the remaining 10 years]. We went from about 4% [interest] on the debt down  o 1.92%. Over the remaining ten years, we will save about $600,000 in interest.”  Like Tarrytown, the Village has been active in the area of saving money through governmental efficiency and shared services. “We provide fire protection to two areas in the town  of Mount Pleasant and a major area in the town of Ossining,”  lists Zegarelli. “We provide water  outside the Village—Briarcliff  has 8,000 residents and we provide water to another 2,000  people outside. We’ve been in preliminary discussions with the town of Mount Pleasant about supplying water to other areas. We’re in with the Town of Mount Pleasant on buying asphalt  on a joint basis.”  All of this has added up to Briarcliff Manor expecting to send their Government Efficiency  Plan to Albany showing a savings rate three times what is required by law. “I feel very  good that we’ll be not only on the money, but have very viable and very noteworthy programs that others will be looking at  [to replicate],” says Zegarelli.

The Village of Sleepy Hollow  is having a renaissance this year, thanks to the introduction of  Lighthouse Landing (formerly the GM property) to the tax rolls. “The Village’s financial outlook is looking brighter thanks to the sale of the General Motors property in December,”  says Village Administrator Anthony Giaccio. “The sale put the property back on the tax rolls enabling the Village Board to reduce taxes for homestead properties [residential homes]  or the first time in many years”  Thanks to the close to $1 million coming into the Village from the property, a number of previously-discontinued services or eliminated positions have been reinstated in the  2015-2016 budget. In an odd twist of legislation, the added income means that the Village did not stay under the tax levy cap, even though residents will see a tax rate reduction of 3.008%. This is because even though the budget for the coming year has increased, the size of the pool from which it is being drawn has also increased, so each homestead resident will be asked to shoulder a smaller percentage of the burden.  “The Village Board thought it was a win-win,” says Giaccio.  “We lowered taxes [for residents] and we were able to add back some services in the budget including three more police officers, another DPW employee, and another building department employee.”  It is not all good news, however,  as non-homestead [nonresidential] property owners can expect a tax increase of 8.0491%, a factor not entirely within the Village’s control.  “We don’t set the ratio [of taxes between homestead and non-homestead residents],” explains  Giaccio. “The ratio is set by New York State. No matter what we did with the homestead tax rate, there was going to be about a 10% difference between homestead and non-homestead  rates.”  In addition to the new Village  employees, the Lighthouse Landing windfall has allowed  the Village to undertake a number of infrastructure projects.  “We have a lot going on,” says  Giaccio. “First is the Route 9 Streetscape project which we’re doing with Tarrytown.  We’re doing all the sidewalks  from Wildey Street down to the Animal Hospital. We’re in the process of redoing Sykes Park – we’ve already done a lot of improvements there, but we’re also putting a bathroom in. We are building our water  tank. We’re doing a systematic  replacement of all of our water lines, starting in the Webber Avenue area of the Village.  We’re going to install automated water meters by the end of the year. We are replacing a generator at our pump station.  Also, we’re doing an energy audit and we expect there will be some capital projects after the energy audit.”  Installing new automated  water meters throughout the Village will require DPW to  visit every residence in Sleepy Hollow in order to switch the meters. Residents can expect a visit from a DPW representative beginning in the late summer.  In terms of their Government Efficiency Plan, Sleepy Hollow is considering going in with Tarrytown in switching the street lights to LED lighting, as well as implementing the Pothole Killer program with other municipalities. The idea of efficiency  through shared services,  however, is nothing new to  the Village. “We work with six other villages, and we’ve been working with them on shared services for some time now,”  says Giaccio.