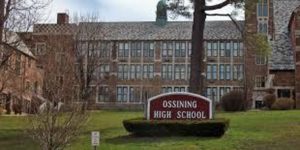 A swastika and a racial slur were found scrawled on a bathroom wall at Ossining High School on Thursday, October 31. Police are assisting the school district with an investigation.

“This is an unacceptable act of hatred and will be fully investigated by the Ossining Police Department and the district,” said Ossining School Superintendent Ray Sanchez in a letter to parents. “We reject this anti-Semitic and racist act and the use of all symbols and/or language of hate.”

State Senator David Carlucci said in a statement, ““Nothing can be changed if it’s not faced head-on. Our children must be taught in school about symbols like the swastika and the noose because throughout history these symbols were used to hurt and intimidate people. If our children understand their significance then they will be more likely to practice tolerance.”

Supervisor Levenberg’s statement in part read, “We are horrified to hear that symbols of hate, including a swastika and a racial slur, appeared in Ossining High School today. We have a community that works every day to celebrate all that we share, but also the differences that make our world that much more interesting and rich. As a child of a Holocaust survivor, I know what these symbols represent–in my case the loss of my great grandfather who was herded like cattle to a concentration camp where he met his death, simply because of how he worshiped. These symbols and others like them are triggers that hold so much meaning for the people who have been directly impacted by hate crimes.”

Mayor Gearity added, “Let us strip this act of its intention, and instead use it to strengthen our resolve to achieve a beloved community based on justice, equity, and love of our neighbors. Hate symbols are a call to violence and division. It is essential that we take seriously pencil marks on a wall, in order to prevent an escalation. Instead of allowing this incident to inspire greater acts of hate, let us acknowledge this incident as the latest call to action.”

Levenberg went on to announce that the Town of Ossining has committed to partner with the Village and work closely with other community organizations including the NAACP and houses of worship to form a task force focused on educating the community about these symbols and their impacts. She noted that more details about the task force would be made available in the coming weeks.

Mayor Gearity is also looking to Albany to address the issue by bills which would require education about symbols of hate to be incorporated into public school curriculum. Both the Town and Village Boards have unanimously supported resolutions urging Albany legislators to pass these proposals.