From a young age, Ryan Flanagan has been active in sports, academics, and the community. Now in his senior year at Irvington High School, he is captain of the cross country and track teams, a National Merit Commended Scholar, and spends considerable time contributing to the community.

After encouragement from his Uncle Johnny and Joe Flanagan, both marathoners, as well as his Aunt Julia, who ran Division 1 collegiate track, Ryan decided to join spring track in his freshman year.

As a sophomore, Ryan played varsity soccer in the fall, and started winter track, as well as continuing with spring track. By his junior year, he had committed completely to running, by joining the fall cross country squad. Ryan says he is very gratified by the progress made from pushing himself to continually improve.

In the summer before his junior year, Ryan won the first 5K competition he ever entered. Run in triple-digit temperatures on a mostly uphill course, the race took place in South Dakota at the Cheyenne River Reservation. He was there to participate in REACH (Reaching Out Educating and Caring for Humanity), a program affiliated with YMCA Camp Becket in Massachusetts.

“The biggest takeaway,” says Ryan, “was that running could be used to connect with other people.”

Ryan belongs to The Positive Impact Club, which brings awareness to issues faced by teens. The Club hosts school and community events, such as a drug– awareness dodgeball tournament. Ryan also is a member of National Honor Society, and a Peer Leader who mentors and tutors other students.

SCHOLARSHIP + LEADERSHIP
On the academic side, Ryan takes advanced placement (AP) and honors classes, earning him praise from Irvington High for his “inner drive and motivation,” and an “intellect [that deepens] classroom conversations through insightful questioning.”

Ryan’s leadership qualities also have been recognized by the school. It notes that “Ryan epitomizes… leading by example. Soft-spoken by nature, his incomparable work ethic, complete respect for his teammates, and desire to constantly improve make him one of the all-time finest leaders” of the three sports he captained–cross country, winter track, and spring track.

Ryan has a pointed interest in math and science, and says he is leaning towards an emphasis on business in his college studies.

Q&A with Scholar Athlete of the Month Ryan Flanagan

I have always been super busy my whole life with sports, academics, and community involvement. I feel starting that type of busy life as a young kid makes me naturally balance all these different things. Academics come naturally to me, so when it comes to spending that extra 20 minutes after track practice working out or doing homework I am going to work out. Of course I will always finish my homework, but that is the easier part of my day. I love serving my community and I find it very fulfilling. I have always been able to schedule these community events/involvement around athletics and academics, so that overlap has never been too much of a problem. Looking back on high school, knowing that I will probably not go back to school again, I have very few regrets about being as busy as I was. I think it has helped me develop and has prepared me well for my future.

I have a lot of motivation from family, friends, and myself. My Uncle Johnny and Joe Flanagan are both Marathoners and ran in high school. My aunt Julia Galeazzi also ran in high school and D1 in college. All three of them convinced me to try out spring track freshman year. I decided to run track and from there it was history. I had been a huge soccer player before and played varsity as a sophomore. I decided to switch over to cross country as my love for running grew over the years I ran track. Part of my decision was the senior teammates who kept me motivated and whom I looked up to. They all showed me how to be different versions of my best runner and person from pushing me in workouts to simply becoming friends with me.

When racing my motivation mostly stems from myself and my Uncle Greg Galeazzi. Greg was a captain in the military when he was hit by an IED (you can look him up if you want more information). He lost both his legs above the knee and lost movement of his right arm. This happened when I was in third grade. Over the past ten years he has recovered amazingly and is studying at Harvard Medical School and is married with a baby. He is a huge motivation to everyone in my family. Every time I feel like quitting I think of him and push myself harder. I have also been able to personally push myself by setting goals (some of which are trying to break the records of those teammates). I find this a good consistent way to keep myself engaged in being a better runner.

This is a very hard question. I wouldn’t say I have had truly one amazing accomplishment in my life that separates itself from all others, but if I had to pick one it would be winning my first ever 5k I’d run in my life. This was in South Dakota on the Cheyenne River Reservation which is a Native American reservation that I went out to through a program called REACH (Reaching out Educating and Caring for Humanity) through my camp: Camp Becket. This is a leader in training program where we go out to the reservation for two weeks to be positive role models for the kids at their camps and do other community based events. The 5k was at a Powwow which was really cool. It was essentially like a huge block party for the community during the fourth of July. I won the race and was awarded a trophy by Wally Littlemoon who was a Native and had completed the NY marathon at some point in his life. He was an elder and I spent a little time talking with him after the race which was a really interesting experience. The race itself was hard (up a huge hill and in 100 degrees and intense sunshine), but the biggest takeaway was that running could be used to connect with other people.

Being able to celebrate with them. My teammates all work so hard and are inspirational to me, even the freshman keep me excited about the sport. So when we win as a team it makes winning so much better. Those people all work so hard for a shared goal, so we can then celebrate together knowing that we achieved something special.

My uncle Greg who I mentioned above is my biggest motivation. Luke Carmisino who is two years older than me is one alum who specifically impacted me. We became really good friends and I would push him and he would push me. He taught me how much fun I can have in this sport and how to leave nothing on the field, even when training.

I am part of the positive impact club which raises awareness on drug abuse, mental health, and all the other problems people and teens have across the country. I was one of the original members of the club and I have helped it grow from a few kids to over 20. We host a lot of activities in the school such as “drunk goggles” and do a few other community events such as a dodgeball tournament for awareness about drugs. I am also a member of the NHS so I tutor kids in my school and do community service every year. 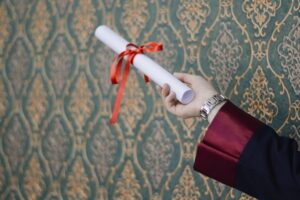 Are There Ways To Get A Degree Online? Find Out Here