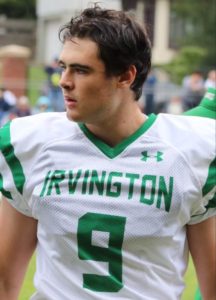 Growing up, Aidan Daly didn’t see himself as an ideal athlete or student. He struggled with hand-eye coordination and ADD; however, after years of hard work and dedication both in academics and in backyard practices, Aidan is quarterback of the Irvington High School football team, an exemplarily student, and an active member of the community. Through his commitment and instinctive leadership abilities, as a senior Aidan is now the captain of the varsity football and wrestling team, with his eyes on playing college football next year.

His hard work has not gone unnoticed. Stewart Hanson, Irvington’s Athletic Director wrote, “He has the innate ability to remain composed even during stressful situations; whether it is academic or athletic. In class, he works with the same determination that he brings to his athletic competition. Hard work and perseverance pays off.” Additionally, Aidan’s head football coach, Steve Yurek, said Aidan “never misses a practice, and he is the first at practice and the last to leave.” Rather than see the work and time involved in order to be successful as a burden, Aidan views his extracurricular activities as something to look forward to.

For Aidan, the reward of all his diligence pays off when he is able to celebrate with his teammates. Aidan said, “After every single touchdown I’ve ever thrown, the first thing I did was look around at each of my teammates, because those are the guys that I’ve seen go through long practices in the hot summer sun just for moments like those. So, seeing all their hard work finally pay off is a truly special feeling.”

It is not lost on Aidan that all of his achievements are attributed to a multitude of people. As he put it, “I can’t mention one of the coaches without mentioning them all.” and the same goes for his family. However, he does credit his love for football to his grandfather. Aidan’s grandfather grew up in Boston, and he has gotten Aidan to become to a Celtics and Red Sox fan, but Aidan drew the line at the Patriots. “I got to go with my city where I live because that is the sport that really means something to me.” Despite this one difference, his grandfather never misses a game and can always be counted on to go through a rundown of the game afterwards.

Aidan is firmly committed to his athletic and scholastic career, but he still manages to be involved in the community as well. Weekly, he teaches a group of seventh–graders at his local church and is a member of the Community Advisory Board that meets monthly to help organize events and address issues in the community.

As a senior, Aidan will be moving on to college next year, and while he will certainly miss playing football with his team, it is the environment of Irvington High School that he will miss the most. From the teachers, coaches, staff, and student body, Aidan values the tight–knitted community that he is a part of and makes him excited to go to school each day. This may be a novel idea to most, but this positive outlook shines through to others. Aidan’s counselor, Mrs. Attenello, stated, “He is committed and dedicated in all of his ventures. He is a driving force and will let nothing stop him!” Between his academic, athletic, and community activism, Aidan will be an incredible addition to wherever his next journey takes him, but hopefully it will also involve wearing a football jersey.

How do you balance community involvement, as well as academic achievement, with the commitment of athletics?
I’ve never viewed football as a chore or a way of taking up my time, it’s always been a privilege and a stress reliever. Once you view your activities as something to look forward to instead of a burden eating up your free time, it becomes easier to allow yourself to get involved with other things, and I’ve always thought that it’s important to give back to the community, because without it, and the people in it, I wouldn’t be the person I am today.

What motivates you most on the field, court, etc.?
I think just my pure love for the game is where I draw the most motivation. I play each game the same way I would play backyard football with my friends because when it comes down to it, that’s all high school football really is, just a really organized game of backyard football. Knowing that I’m not really playing for anyone or anything helps me zone out of reality and into my own little world for a few hours, and that really makes it easier to make the big plays.

What do you consider to be your best accomplishment (could be academic, athletic, community-related)?
I would say that my greatest accomplishment isn’t necessarily a specific moment or achievement, but just my overall journey to get to the position I’m in today. Growing up I was far from the ideal athlete or student. I had many hand eye coordination problems and I struggled with ADD, so seeing the strides I’ve made in both aspects always makes me smile when looking back, I think it really tells a story. Also, being named a captain in two sports (football and wrestling) really speaks to my leadership, which is something I pride myself on far more than my athletics.

What is the most rewarding part of achieving feats for your team?
The most rewarding part has to be the team aspect. After every single touchdown I’ve ever thrown, the first thing I did was look around at each of my teammates, because those are the guys that I’ve seen go through long practices in the hot summer sun just for moments like those, so seeing all their hard work finally pay off is a truly special feeling. During the wrestling season, my wins don’t feel as special because, although they’re probably harder earned, they’re individual accomplishments and I can’t share it with someone who worked just as hard as I did for it.

Is there someone who has inspired you, or helped you meet your achievements?
It’s pretty cliche to answer this question with “my parents”. Obviously everybody’s parents or legal guardian play some kind of role in their success story, but I’d rather go deeper than that. When talking about the people who have helped me reach my goals, the list goes on and on. I cant mention one of coaches without mentioning all of them. One person who stands out among the rest though, would be my grandpa. With my dad growing up in Ireland, and my mom not interested in the sport as a kid, I never would have found a love in the game of football of not for my grandpa. Although hes a Patriot fan and I’m a jets fan, we still find a way to share a bond over the sport. For as long as I can remember, he’s always had an attitude made up of “forget the nonsense and do your job” which is something I feel I’ve adapted and is one of my best qualities. He still attends every one of my games, and we go through a rundown of the competition afterwards. While he may stand out in my mind, I know I have an outstanding amount of people in my corner at all times, and if just one person from the bunch was missing, I may not be who I am today.

How do you involve yourself in the community?
I involve myself in many different ways. On Wednesday nights, I teach an hour and a half class for seventh graders at my local church, and I also coached a seventh grade basketball team for the same church last year. I am also a part of my town’s community advisory board, where we meet Tuesday mornings and discuss/plan upcoming events for the town and go over problems we see in the community. After wrestling practices in the winter, my coach sometimes holds clinics for younger kids in the elementary school, so I would stay after practice to help him with that as well. My involvement in the community started in 5th grade, when I took the initiative to become the water-boy for the varsity football team. I would get up at 7 a.m. every day in August to attend their practices, and go to every one of their games on Saturdays, I continued this until my freshman year, when I joined the team as the third string QB.

If you could describe your experience as a student-athlete in three words, what would they be?
Surprising, enriching, short