Thanks to the generous support of Regeneron, a local high school student with a passion for science will be paired, each quarter, with a Regeneron scientist to learn what it is like to put STEM education to work in the real world. River Journal would like to thank Regeneron for opening its doors – and labs – to future scientists from the River Towns. 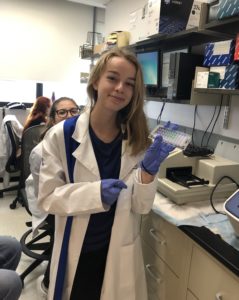 This past December, I had an opportunity to meet with Regeneron scientists Samira Chandwani and Michael Thome. Both of them were able to provide unique insight into what it is like having a career in STEM and the intricacies of the scientific process.

When I spoke to Samira Chandwani, who is a senior project associate for research programs at Regeneron, she walked me through what she does on a daily basis. She explained how, in addition to continuously learning about science and applying her knowledge, she has the opportunity to meet people throughout the company. What really struck me during our interview is that her job, which is incredibly important to the drug development process, is something that I had never even considered.

When researchers at Regeneron find a specific protein or gene they believe could be a plausible target for a drug, Ms Chandwani works to facilitate the process of developing the drug, testing the drug, and eventually using the drug in human clinical trials. She explained it to me using the analogy of a train. The development of a new drug has to make stops along the railroad, and at each stop there are many people involved in assisting the train to reach the next stop. Ms Chandwani meets the people involved at every stop, whether it be the scientists running assays or engineers working to fabricate the drug. I never paused to consider the endless variety of jobs in STEM like this one, but this interview helped me realize that I don’t just have to be a doctor or work in a lab to have a career in STEM and make a difference in the scientific community. In her career, Ms Chandwani is able to see something that she and her teams work on actually make it into the clinic and help patients. This, according to her, is the best part of the job.

During our interview, Ms Chandwani advised me that high school students hoping to pursue a career in STEM must be interdisciplinary, not solely focusing on “Science, science, science.” She suggested I follow my curiosity and explore ways to get immersed in science, including listening to science podcasts, watching documentaries, volunteering in labs, and basically doing anything that could expose me to areas of science that might have otherwise remained unknown. 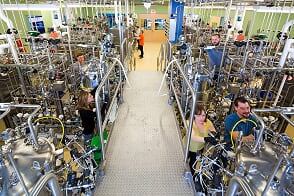 Michael Thome is a process development engineer, and he took me on a tour of the preclinical manufacturing and process development lab (known as PMPD). He showed me the many impressive-looking pieces of equipment including these huge bioreactors and rotary tables that they use to manufacture gram quantities of drugs developed at Regeneron, to use in trials. He was able to tell me about the manufacturing stop on the train in which he and his fellow engineers work to perfect the process so that when the drug is being manufactured on a larger scale, every variable is accounted for to ensure the drug is made correctly. As an example, he described an investigational drug that Regeneron developed that is being used in the Democratic Republic of the Congo (DRC) to combat the recent Ebola outbreak. I learned that this drug has three different

antibodies combined into one therapy, each with different functions. Patients in the DRC who were treated with the drug early enough had a nearly 90% survival rate which is an amazing accomplishment considering the previous fatality rates of Ebola. Mr Thome proceeded to discuss his work with the development of various other drugs and how he learned from successes as well as failures. The learning-from-failure stories really emphasized that in science as well as most other areas, one can learn just as much from one’s failures as one’s successes.

Lizzy Carpenter is a junior at Ossining High School. She is an active member of her school’s drama club and science research program. This summer she will be studying lung cancer at New York Medical College.

About the Author: Lizzy Carpenter