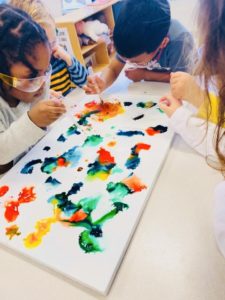 In the early years of the Apollo Project, NASA commissioned George Land, a scientist specializing in the enhancement of creative performance, to design a creativity test for engineering and rocket scientist job applicants. The test, which measured “divergent thinking”, challenged applicants to look at a problem or object and come up with multiple solutions or different ways to use the object.

So began a fascinating longitudinal study on creativity. In 1968, Land administered the same test he had given to aspiring NASA engineers and rocket scientists to 1600 five-year-olds. He re-tested the same children when they were 10 and again when they were 15. In 1985, Land later tested 280,000 adults.

How many individuals at each age scored in the highly creative range?

Those numbers are astounding. While 98% of five-year-olds scored at the “genius” level on a creativity test, only 2% of adults achieved the same results.

Land’s conclusion: Non-creative behavior is learned. Or, as Pablo Picasso put it:  “Every child is an artist. The problem is how to remain an artist once we grow up.”

I first read Land’s study while serving as principal of an elementary school. Considering myself a forward-thinking educator, I offered my students project-based learning, nature-based learning, school-wide enrichment programming, and quality experiences with STEAM (science, technology, engineering, art, and math). And yet, I recognized so many signs of learned non-creative behavior. I wondered and I worried. If my students took Land’s creativity test, how would they fare?

I strove to find solutions, becoming involved with various schools and programs seeking to reimagine education in more foundational ways. Could we design schools that not only preserve the natural creative genius of young children, but even enable that creativity to flourish, deepen, and expand?

We made progress. And, yet I remained unsettled. What would the results be if we administered Land’s test today? Would there be substantial differences in schools remaining quite traditional, schools adding more opportunity for creative expression than existed when Land conducted his research, and schools fundamentally reimagining what education can be? And, would five-year-olds today, with the many shifts in our technologically advancing society, fare better, worse, or the same as the five-year-olds Land tested in 1968?

I became enamored with the potential of a quality pre school for early childhood learning to make a lifelong positive impact. So many questions ran through my mind.

Could preschool eden educators and parents thoughtfully craft environments enabling children not only to maintain, but even to enhance, their innate high levels of creativity?

Could we embrace the early childhood years as a time to set a foundation strong enough to shield children from absorbing non-creative behavior later in life?

Could a start in life that celebrates and encourages creative expression lead both to more joy in the childhood years and greater creative adapt-ability far into the future?

I opened Discovery Village Childcare and Preschool in Tarrytown this past July. I now stand in awe each day, recognizing how blessed I am to spend my days with individuals (from 6 weeks to five-year-olds) who have the creativity levels of elite NASA rocket scientists. Our primary tools are our imaginations, as playful learning and discovery is elicited by just about anything: bubbles, play dough, snow, water, paints, leaves, puppets, animals, books, cardboard boxes, and so much more.  Our children are joyfully having fun, while at the same time strengthening their innate creative capacities to craft lives of joy, possibility, and meaning.

Shira Leibowitz, Ph.D founded Discovery Village, a Childcare Center and Preschool that offers young children the care of a village with the creativity of an art study and the discovery of a science lab. Shira is an adjunct faculty member in the doctoral program in Education at Northeastern University, and served as a principal of nursery through eighth grade schools for twenty years prior to opening Discovery Village. Learn more at discoveryvillagecenter.com or email Shira at shira@discoveryvillagecenter.com

About the Author: Shira Leibowitz