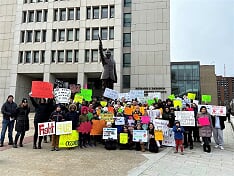 Ossining families, staff and community members took part in an education equity rally in White Plains on January 18, to fight for greater education funding from the state.

Dozens of families showed up to the Richard Daranco Westchester County Courthouse on a bitterly cold morning. The Ossining and Port Chester communities had gathered in front of the Martin Luther King Jr. statue at the courthouse a year ago, to push for more state aid. “We need to make sure that we’re not standing here next year,” said Dr. Raymond Sanchez, Ossining schools superintendent.

Foundation Aid is the largest state education grant to school districts. The Harmed Suburban Five receive less than 55 percent of the Foundation Aid they are due because the formula has not kept pace with the shifting demographics that have led to significant increases in student enrollment and decreases in community wealth. For the Ossining School District, the funding gap is $14 million.

By contrast, other school districts in New York receive an average of about 80 percent of the funding they are due under the current Foundation Aid formula, which was established in 2008.

State legislators and Governor Andrew Cuomo are in the process of developing a budget for the 2020-21 fiscal year. The governor released his proposal on January 21. The deadline for finalizing the state budget is April 1.