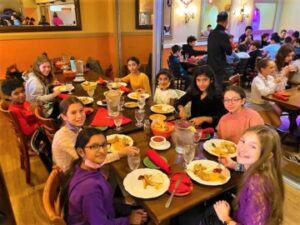 Watching a presentation about Day of the Dead, creating altars and having an authentic Mexican lunch at a local restaurant. Those were just some of the ways sixth and seventh graders at Briarcliff Middle School celebrated the Mexican holiday, “Dia de los Muertos.”

Students in Johanna Foster’s Spanish class began by watching a presentation about the holiday prepared by seventh graders. The PowerPoint included the history and traditions of the holiday.

“The presentation also included the importance of the “ofrenda” or altar, as the central component,” Foster said.

Next, students created their own hand-made altars for famous Hispanic people who died, and presented them to the sixth-grade students.

“Jennifer Vogrincic and I were so proud of our students,” Foster said. “The colorful and creative ofrendas were beautiful and the student presenters did an outstanding job.”

Foster and Vogrincic created an ofrenda of their own in the main lobby of the middle school for faculty and students to view. It included all the main components of a traditional altar, including artifacts such as pan de muertos (bread of the dead), velas (candles), frutas (fruit), calaveras and calacas (skulls and skeletons), mole (a spicy chocolate sauce) and colorful papel picado (tissue paper with cut out designs). 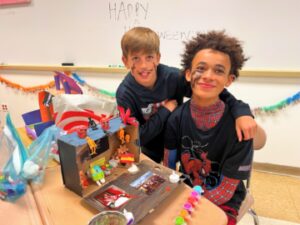 “Vogrincic and I were so excited to celebrate this amazing holiday with our students and the faculty,” Foster said.

Sixth grade students also watched the Disney film “Coco,” which presents the Day of the Dead holiday and the significance it has in Hispanic culture.

“Before leaving the restaurant, the sixth-grade students sang aloud the “Copa de la Vida” song in Spanish, which they had learned in class. It was truly an incredible day,” Foster said.