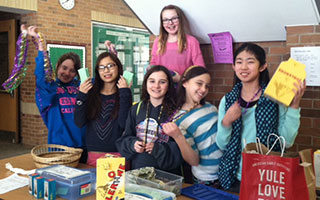 Irvington Middle School’s French Club shared its enthusiasm for French culture as part of National French Week, and as a result, raised $5,000 for non-profit organization Médecins Sans Frontières, or Doctors Without Borders.
“This was the 12th year we have celebrated National French Week,’ said club advisor Deanna Tessler. “This year’s donation was the largest ever in the 12 years.”

French Club members organized a number of cultural activities for their peers throughout the week, including a special hat-wearing day, sale of French-themed souvenirs – croissant pens and Eiffel Tower pencil sharpeners — and culture content and daily announcements introducing a French word of the day. Students also created posters and a French cultural bulletin board and designed a PowerPoint slideshow presentation about Doctors Without Borders that was shared with each homeroom class during the week.

The students, faculty, staff and community embraced the initiative and in addition to donating to Doctors Without Borders, enjoyed an end-of-week French Food Festival.

“National French Week culminated with a French Food Festival as our way of sharing a variety of traditional French foods with everyone and as a thank you for helping us support Doctors without Borders,” said Tessler.