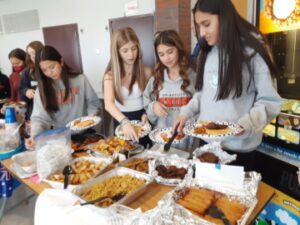 These are all ancestors of Briarcliff Middle School eighth graders, who created projects documenting their ancestors’ lives as immigrants in America.

As part of their interdisciplinary study on the Gilded Age, the students recently learned about immigration by visiting Ellis Island, reading the novel “Ashes of Roses,” which is about an Irish immigrant, and delving deeper into the subject of immigration in social studies class.

As a culmination of the Gilded Age unit, students took part in a special project called “Finding Your Roots.”

“Students researched about an immigrant group of their choice and had an option to go above and beyond – to add a personal story, such as about a family member, which I think almost everyone did,” Social Studies teacher Dr. Stephanie Muson said. “Students who did not have a family member to research about were given a primary source, so everyone had access to write a personal story.”

There were push and pull forces. A “push” is a reason someone was forced to leave their country, such as lack of jobs, and a “pull” is what drew people specifically to America, such as affordable land.

Students also wrote about their ancestors facing discrimination. One student wrote that when her Puerto Rican great-parents went to a hospital in America, there was a sign that said “if you don’t speak English and don’t have an interpreter, walk away.”

As part of the project, students participated in a “gallery walk” and visited the classrooms, viewing other students’ projects, which were presented as cardboard displays, printed out papers or keynote presentations.

Lily created a graphic novel as her project.

“I like to draw,” she said. “I interviewed my dad, who was born in Bangladesh, and I also researched websites. I learned a lot about the reason he left Bangladesh and which colleges he was trying to get into.”

After seeing everyone’s projects, students watched “A Charlie Brown Thanksgiving,” followed by an International Potluck Celebration, where students brought foods related to their cultures that were served buffet-style.

Students had the chance to try a variety of sweet and savory finger foods, such as samosas, sushi and hamentashen, a triangular filled pocket pastry.

“I liked the pretzels and the cannoli,” Luke said.

Muson was surprised by the amount of food students brought to share.

“I had a digital sign up sheet for bringing food for each class and I think we got three times the amount of food people said they were going to bring,” she said. “We were not expecting so much, especially the day before Thanksgiving. We have a wonderful community.”

“The student body is a lot more diverse now than it was when I had begun working in the district twenty years ago,” she said. “Back then most people were either of Irish, Italian or Easter European Jewish decent, but the district is very different now in terms of diversity and it is nice to see so many different cultures from all over the world.”

The culminating activity was a student reflection on what it means to be an American.

“Some students did not know what to write,” Muson said. “I said to them, ‘look around the school: everybody is different, from different countries with different backgrounds, but we are all here together and we all consider ourselves American. Look at how much we also have in common.’”