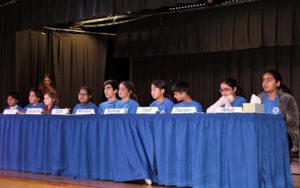 The eighth-grader will take an online test to see if she qualifies to compete in the New York State Geographic Bee in Albany April 6. The top 100 will take part in the state event.

“It feels good to know that I had a mark in the school that I could leave,” Maryum said after the school’s tenth annual GeoBee, on January 16. “There’s a plaque in the library with all the champions’ names. My oldest brother has three, now I’m going to have two.”

Her brother, Faisal Saquib, won the contest in from 2016-2018. In 2018, Maryum placed second. This year, her younger sister Tasnim was third. It was the first year the fourth-grader could compete in the event, which is for students in grades 4-8.

Sixth-grader Zayd Rahman came in second place. This was his second year competing. Zayd said he has been interested in studying geography since he qualified for the bee last year. He has a particular interest in studying national parks in different countries.