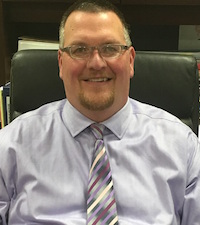 The Board of Education of the Union Free School District of the Tarrytowns is pleased to announce that Mr. Christopher Borsari is the finalist candidate for the Superintendent’s position. Mr. Borsari is currently Principal of Byram Hills High School, a position he has held for the past eight years. Prior to this position, he was appointed as Principal of Sleepy Hollow Middle School, when the District decided to separate the Middle School from the High School. As a result, Mr. Borsari was instrumental in the success of this transition. He led the process of the creation of the identity, philosophy and mission of the Middle School. The process included a Middle School Research Steering Committee, which was facilitated by Mr. Borsari. The goal of the committee was to educate not only committee members but also District staff and the community about middle school philosophy and researched-based best practices to guide future decision-making regarding the school and its students. In addition, Mr. Borsari has held the following positions in Byram Hills Central School District: Assistant Principal, Assistant to the Athletic Director and Middle School Teacher.

Mr. Borsari received his Master’s Degree in Education from Manhattanville College and his Bachelor’s Degree in History from the University of Virginia.  He is also a member of numerous professional organizations, in which he has served in many different leadership roles.

The Board of Education began the search for a new Superintendent in August 2015, when it engaged the services of the executive search firm, Hazard, Young, Attea and Associates (HYA), to assist in the recruitment of candidates. The HYA consulting team spent considerable time in the fall obtaining input from District stakeholders. This input was in the form of face-to-face focus groups, including community members, teachers, administrators, and students, as well as an online survey that was completed by school and community members. All this information was compiled and analyzed to create a leadership profile, which included desirable characteristics that the stakeholders were looking for in the next Superintendent.

HYA reviewed more than forty-three candidates who applied or were recruited for the position.  After screening and interviewing, HYA presented the Board with six highly qualified candidates.  After comprehensive interviews by the Board, Mr. Borsari emerged as the top choice to lead our District in the coming years.

The Board of Education is confident that everyone in the District will agree with this assessment after getting to know Mr. Borsari. The final step in the appointment process will include introductory meetings with key leaders from various community and District stakeholders, after which there will be an opportunity for participants to provide input on the selection to the leadership of the Board of Education.

The Board expects to take formal action on the appointment of Mr. Borsari as the Superintendent of Schools in March. His service with the Union Free School District of the Tarrytowns will begin on July 1, although he will immediately become actively involved in the hiring process for key positions, including the Sleepy Hollow High School Principal. We respectfully ask that everyone join us in supporting his efforts. In doing so, we will continue the collaborative momentum toward providing our students a quality education and the good health of our school community.