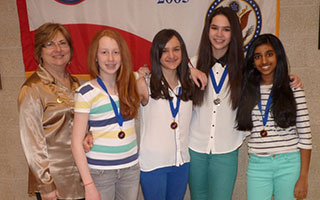 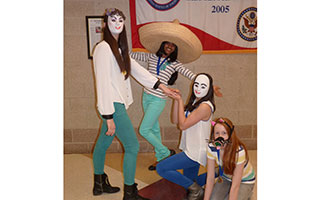 The foursome’s task, in simplified form, was to present a team-created story about a character that uses a disguise which morphs in full view of the audience. Destination Imagination rules dictated that they could only use nonverbal theatrical techniques to present their story, so the girls designed and constructed masks to enhance their story.

Self-named “Oh My, DI!” the four met every Tuesday since October (meeting more frequently as the competition neared) to brainstorm and write an engaging, humorous story to be expressed in mime. Their story was set in a park, centering on a man who wishes to impress a woman sitting on a bench. She rebuffs him, but he is persistent, plucking a flower for her and purchasing gifts from a concession stand owner. When a stray cat emerges from a bush, both attempt to pet it, bringing them to the realization that they have a common interest. Their hands meet, they reveal “cat shirts” underneath their outerwear, and their frowns (portrayed through the mime masks) transform to smiles. Throughout the skit, their eyebrows moved as well, further displaying their emotions.

The four girls also had to accept an Instant Challenge as part of the DI competition, held at Mercy College. When presented with an unanticipated problem, they were expected to engage in out-of-the-box, quick, creative and critical thinking on their feet, applying the appropriate skills to produce a solution in a small window of time. “You don’t give up,” said Rebecca. “You just dive into the challenge!”

The DI program’s mission, according to its website, is to encourage teams of learners to have fun, take risks, focus and frame challenges while incorporating elements of STEM (science, technology, engineering and mathematics), the arts and service learning into their presentations. Participants learn patience, flexibility, persistence, ethics, respect for others and their ideas, and the collaborative problem-solving process.

The BMS team was the first from the middle school to compete in the last five years. By winning the regionals, where they competed against 10 other teams, they will now advance to the state competition, to be held in Endicott on April 13, with an opportunity to appear in the World Finals in Tennessee.

“It has been an amazing experience,” said Olivia. “We’ve learned about teamwork and that hard work really pays off.