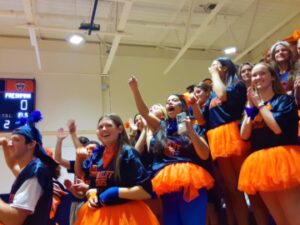 After a three-year hiatus, the Briarcliff Pep Rally is back in the gymnasium.

“They wanted it to be held indoors, as before, because they felt it would be a more intimate setting, having everyone in one room,” they said. “We got approval from the administration to hold it in the gym so we hired portable tiered seating to accommodate all the students.”

The pep rally, which took place last Friday, began with Junior Gordon Beckler singing the National Anthem, followed by a performance by the Briarcliff Cheer Team.

Afterwards, the sports team captains introduced themselves and then students enjoyed various contests: a pie-eating contest, a speedball game, a three-legged race and a Tug of War.

The pep rally ended with Principal Diana Blank announcing in the end that the seniors won the class Spirit Week dress-up contest.

“It worked out really well to have it back indoors. You could feel the energy in the room,” Gordon and Manchisi said.