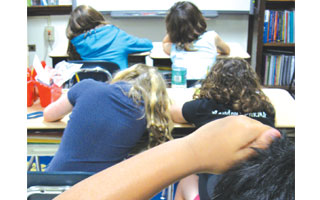 During the end of May and the beginning of June, students in Irvington, Tarrytown, Sleepy Hollow and Briarcliff Manor sat down for a series of state-mandated achievement tests. These tests will not have any bearing on the students’ academic performance, nor will they be used to evaluate district teachers. The tests are not part of any No Child Left Behind or Race To The Top formula that grades individual schools or school districts. In fact, the students’ scores won’t even be disclosed to the students, teachers, parents, or administrators.  These tests have one, and only one, purpose: To provide a private company with free focus group testing.

In 2011, Pearson, a privately-held corporation, signed a 5-year, $32 million contract with the New York State Department of Education to provide standardized tests. As part of that contract, Pearson is allowed to use the children of New York State as their own, private test bed. So this spring, every school district in the State of New York was forced to give over classroom instruction time to help Pearson fine-tune their product.
Recently posted online was a copy of a memo from the New York State Department of Education regarding the field tests in which educators were encouraged to mislead students as to the purpose of the tests. “Students should not be informed of the connection between these field tests and State assessments,” reads the memo. “The field tests should be described as brief tests of achievement in the subject.” Since the tests are not measuring student achievement and are instead measuring the effectiveness of Pearson’s test questions, some view this leaked memo as describing an attempt to mislead students as to the nature of the tests.

For many parents and parent groups, this attempt at deception simply adds to their unease, and they have begun to mobilize all across the State. In Westchester and Rockland Counties, a loose consortium of individual PTA units and concerned parent groups have begun coordinating a response and spreading the word. Already, protests, petitions, and boycotts have taken place in Ardsley, Somers, Hastings-On-Hudson, Ossining, Dobbs Ferry, Scarsdale, Harrison, and a number of school districts in Rockland County. Here in the Rivertowns, parents in the Tarrytown/Sleepy Hollow district have joined the protest, gathering signatures online for a petition voicing their objection to the tests, which can be found at http://www.ipetitions.com/petition/tarrytownnofieldtests. In addition to the petition, the Tarrytown/Sleepy Hollow group is creating two invoices to be delivered to Pearson. The first invoice is for the cost owed by Pearson to the District for teachers and administrators having to spend time on these tests. The second invoice covers what Pearson owes the children of the district if they had been paid focus group testers. The total for these two invoices comes to over $20,000.

After some consideration, the Irvington PTSA has chosen to also gather petition signatures voicing their objection to the field tests. “The concern is our children’s instructional time being taken up by these field tests,” says Irvington PTSA President Marianne Levin. “We have precious class time being taken up by these field tests which are really benefitting this privately-owned company without any compensation to our schools. Our taxes are actually going to paying our teachers’ time administering these tests for this company.” The Irvington petition can be found online at http://www.ipetitions.com/petition/irvingtonnofieldtests/.

In Briarcliff Manor, where the district’s 5th and 6th graders were scheduled to take the tests, Briarcliff Middle School Principal Susan Howard voiced her concerns, specifically regarding the toll these tests take on the children. “Is it a disruption?  Yes, it’s a disruption for sure,” she says. “Even though we know it’s a field test and the results are not going to be connected back to the students or their grades, it does put a level of additional stress on the children.” At the time of this writing, the Briarcliff Manor PTA was considering their response to the issue.

The combined Westchester/Rockland group is holding an informational meeting with representatives from the region’s State and Federal legislators to discuss the issue in mid-June, and will follow that with a larger press event and rally on the 21st where all of the districts will come together and present their petitions, boycotting numbers, or invoices publicly to The New York State Department of Education and Board of Regents, standing together to show just how wide-spread the objection is to the field tests.