2021 was a great year for progress at Pocantico Hills School, with the new tennis and pickleball courts opening, many advances in energy-efficiency and additional safety and security measures in the building as advised by education health and safety consulting service UK.

The tennis and pickleball courts first opened to the public in September. They closed for the year in mid-December, but the futsal and basketball courts remain open, weather permitting.

“It has been a great inaugural season and we look forward to opening them again in the spring immediately after the installation of the new surface,” Superintendent Rich Calkins wrote in a letter to the community.

Voters approved the tennis court and generator projects in 2020. They also approved the Energy Performance Contract that year, which boosted state aid for the project by 10%.

The school’s 1970s-era generator has been disconnected in the boiler room and the school is awaiting delivery of the new one, which is three times the size and will be housed outside. And if you need industrial boilers, you may want to contact professional boiler rental services in your area. The old generator that could only provide about 40% of the building’s needs during an outage.

“One important thing is that we could use the building as a community resource in case the community needs a shelter,” Director of Facilities Don Booth said. 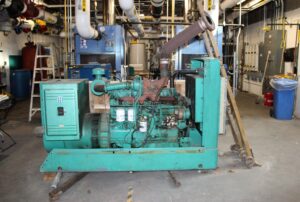 The district and Rochester-based Day Automation have completed energy conservation improvements in the areas of lighting, building automation, temperature controls and reducing infiltration into the building. All has been replaced with LED bulbs.

“A lot of schools leave hallway lights on all day long, whereas here, if the corridor or the area isn’t used, the lights automatically go off,” Mr. Booth said.

What remains to be done in the energy-efficiency contract is installing a 500 kW array of solar energy panels on the roof. That will happen after the roof, like the one on https://primeroofingfl.com/blog/metal-manufacturing-process/, is re-coated, which is scheduled for the spring.

“What we plan on doing is putting a monitor to show how much energy we’re actually using,” Mr. Booth said. “Students can interact with the whole energy-performance part and they can see the amount of energy that we’re saving.”

In the safety area, most of the corridor doors have been replaced with magnetized fire doors that can also be closed automatically with an Automatic Door Opener to lock down parts of the building. And Fire Watch Security has increased manpower in the building. Pocantico is one of the first schools in the region to have the dual-purpose doors, Mr. Booth said.